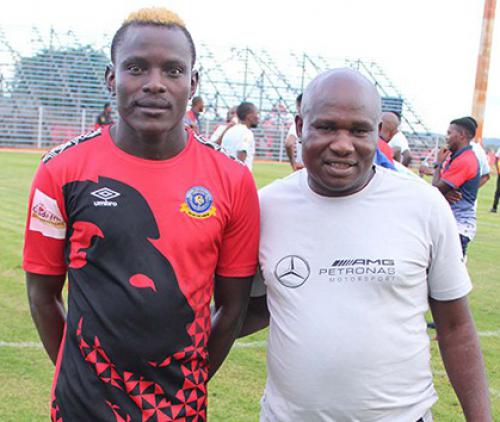 Tshakhuma Tsha Madzivhandila (TTM) enhanced their chances for promotion by beating TS Galaxy 1-0 in their GladAfrica Championship League match at the Thohoyandou Stadium on Saturday.

This was a match TTM could have won by a wide margin. Their strikers, Thembisani Nevhulamba and Wonderboy Makhubu, seemed to have forgotten their scoring boots at home.

Mr Lucky “Mchichwa” Nelukau, the assistant coach of TTM, said that he was happy about the fact that they had managed to collect the maximum points in the match. He admitted, however, that the team’s failure to score at least four goals in the first half was a worrying factor to him. He stressed the fact that everyone in the camp knew that dropping points in their remaining matches would jeopardize their chances for promotion.

He reiterated that their aim was to win their remaining seven matches and see what happened to the other league title contenders, Ajax Cape Town, Swallows FC and Uthongathi FC.

TTM moved a step up on the log standings, following the 1-0 victory. They are now in the fourth position with 38 points. Swallows and Uthongathi have 40 and 39 points respectively, while Ajax Cape Town are shining on top of the log with 45 points.

Swallows and Ajax Cape Town lost their matches last weekend, while Uthongathi drew 2-2 with TS Sporting. Swallows lost 2-3 to University of Pretoria while Ajax were beaten 0-1 by their neighbours, Cape Umoya United.

TTM squandered their first scoring opportunity when the game was only two minutes old. Wonderboy Makhubu received a neat pass from Philip Ndlondlo and unleashed a powerful half volley from the edge of the box. The ball went astray. It took Vhadau Vha Damani 28 minutes to score the only goal. Thembisani Nevhulamba headed home after a scramble within the box.

The visitors from Nelspruit were unstoppable in the last 15 minutes of the game. Simon Mamudzidi, TTM’s acrobatic keeper, denied them a sure goal on the stroke of full time. He stretched to the limit to execute a brilliant save, following Happy Simelane’s half volley from a free kick.