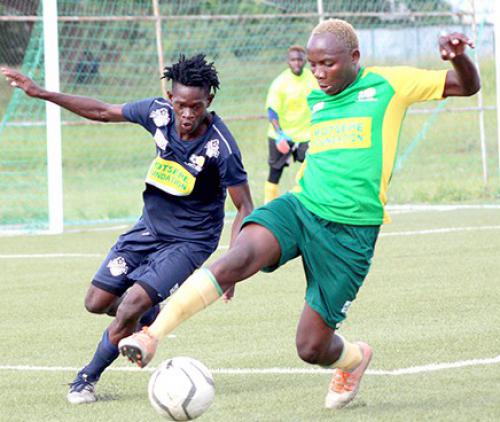 Mikhado FC continued to pave their way to the GladAfrica Championship League when they brutally walloped Ollesdal FC 4-0 at the Rabali Stadium on Saturday. The victory was the second in a row for Mikhado after they beat The Dolphins FC 3-2 at the same venue three days before.

Aluwani “Killer” Nedzamba, the striker of Mikhado, was a marvel to watch in the game. He scored a hat trick.

Mikhado took the game to the visitors from the first whistle. Mikhado invaded the Ollesdal territory for the better part of the first half. They took the lead in the 18th minute after failing to convert several obvious scoring chances. A defender of Ollesdal handled the ball within his own penalty box. That prompted the Tzaneen-based referee, Mr Joseph Mathole, to award a penalty to Mikhado. Bornwise Molobo showed the keeper the wrong way from the white spot.

Nedzamba made his presence felt in the 27th minute. Phathutshedzo Tshauambeya tried his luck from the right corner. The ball hit the upright and bounced back into play. Nedzamba, who was lingering inside the box, gave the ball the final touch.

Ollesdal seemed to give up after Mikhado’s second goal. They lost shape in the middle of the park. Killer Nedzamba was on target again towards the end of the first half. He finished off Nkosana Mapipa’s square pass with a half volley to bring the half-time score to 3-0.

Nedzamba forced his way through the defence of Ollesdal and completed his hat trick in the 78th minute.

Mikhado are now leading the pack with 46 points, two ahead of the second-placed Magezi FC. Mikhado have a match in hand.