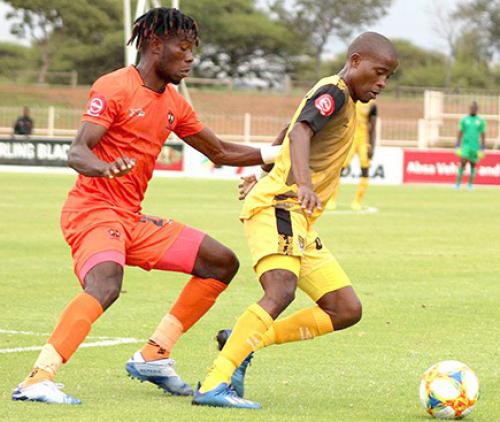 Thabo Matlaba of Leopards is focused on the ball, while Salulani Phiri of City pulls him back from behind.

Black Leopards have a reason to press the panic button. Their future as an affiliate of the Absa Premiership League is fast becoming bleak. Lidoda Duvha conceded their second consecutive defeat last Sunday.

Although they were the first to score, Black Leopards finally went down 1-2 at the hands of Polokwane City at the Old Peter Mokaba Stadium.

Although the game itself was clean, some ugly scenes took place in the corridor leading to the dressing rooms during the half-time break. The problem started when the security guards denied one of the officials of Leopards entry into the team’s dressing room on the basis that he did not have an accreditation card from the league. The general manager of Leopards, Mr Elijah Mulaudzi, tried to explain to the guards and the officials of City that the man was his colleague, but his explanation fell on deaf ears.

A heated argument ensued between the officials of Leopards and their counterparts from City, together with the security guards. The situation took an ugly turn when a fight started between the officials, who were exchanging blows in full view of the security guards. The situation normalised after intervention by the members of the SAPS who were deployed at the stadium.

Mr Allan Clark, the caretaker coach of Black Leopards, could not hide his disappointment and frustration after the game. He said that his team had played well until they had scored their solitary goal 10 minutes into the last half. Mogakolodi Ngele beat the keeper with a ground cutter, following a square pass from Lesedi Kapinga.

According to him, his boys became complacent after the goal. Their celebrations were cut short as City found the equalizer three minutes later through Charlton Mashumba.

Clark further indicated that his team started to play their normal attacking football after they had conceded the second goal towards the end of the game.

Sbusiso Hlubi scored the goal that separated the boys from the men.

Mr Clinton Larsen, City’s head coach, said that the victory had brought some relief to the City family. He reiterated that they would try to maintain their current form until the end of the season to avoid the relegation axe. City moved three steps up the log standings after the victory. They are now lying in the 13th spot with 23 points, while Leopards are languishing in the second-last position on the log. They are tied on 20 points with Amazulu and Baroka FC.

The argument that gave rise to the fight. The officials of Leopards and Polokwane City exchanged bitter words before the fist fight started.