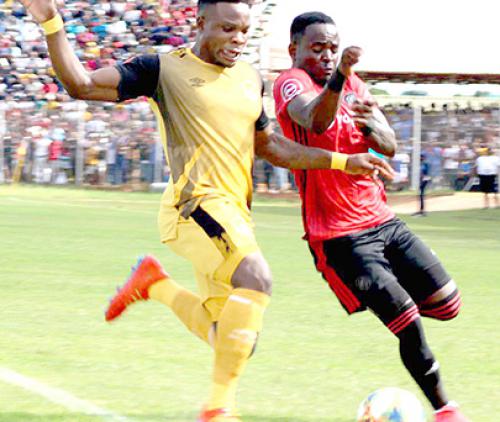 Isaac Masia of Leopards (left) and Gabadhino Mhango of Pirates wrestle to win the ball.

The Buccaneers break the Leopards’ hearts

Black Leopards were almost sure of a point when Orlando Pirates broke their hearts with a late goal in their Absa Premiership League match at the Thohoyandou Stadium on Sunday afternoon.

To be exact, it took the Mighty Buccaneers 90 minutes to score the only goal of the game. An own goal by Thabiso Mokoena, who flicked Vincent Pule’s cross into his own net, was good enough for Pirates to grab the maximum points.

Mr Josef Zinnbauer, Pirates’ head coach, could not hide his excitement after the tough game. He stated that sometimes one needed some luck to win a match. According to him, he had applied all the tactics and strategies in the book against Leopards, but Leopards had seemed to have a better game plan on the day.

He further said that only by luck had they managed to go back to Johannesburg with the maximum points. He also stated that the fact that their keeper, Wayne Sandilands, had been nominated Man of the Match was testimony to the fact that Lidoda Duvha had been unstoppable.

“If my memory serves me well, Leopards could have scored at least three clear goals,” said Zinnbauer. He further said that his players had not played according to his instructions in the first half, adding that it had been difficult for them to match the home side.

Zinnbauer’s counterpart in the Leopards’ camp, Mr Allan Clark, concurred with Zinnbauer’s words, saying his players had demonstrated a spirit of commitment throughout the game and that they had not been lucky at the goal finish.

Sunday’s match was the third for Clark as the Leopards’ caretaker coach. He guided Lidoda Duvha to a 2-1 victory over Stellenbosch FC in a league match and a 4-0 win over North West University in their Nedbank Cup KO match. The Thohoyandou outfit are still lying in the third-last position on the log standings, despite the 0-1 defeat against Pirates. They are tied on 20 points with Baroka FC, Polokwane City and Amazulu FC.