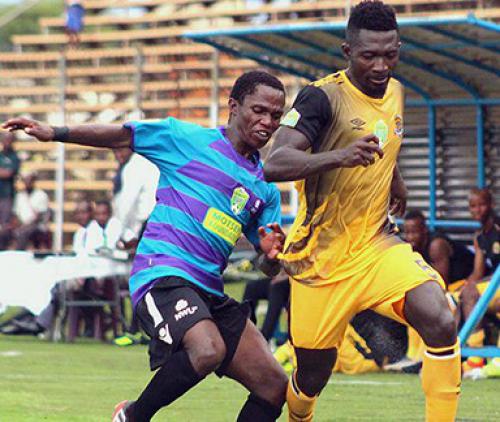 Mumuni Abubakar of Leopards (right) and Sibusiso Ndlovu of NWU chase the ball.

Leopards too strong for NWU students

When responding to questions from a contingent of journalists shortly after his team brutally walloped North West University (NWU) FC 4-0 in their Nedbank Cup KO competition match at the Thohoyandou Stadium on Sunday, the caretaker coach of Black Leopards, Mr Allan Clark, said he was ready to meet any opposition in the next round of the competition.

He reiterated the fact, however, that his wish was to win the home-ground advantage and play their last-16 round match at the Thohoyandou Stadium. His wish became a reality the following day when Black Leopards were matched with another amateur side, Amavarara FC, during a draw that was held at the PSL offices on Monday evening. Amavarara are affiliated to the Eastern Cape Stream of the ABC Motsepe League.

Several of the Leopards’ regulars, including Mwape Musonda, Khuliso Mudau, Isaac Masia, Joseph Mhlongo and Thuso Phala, watched their game against NWU from the grandstand. Asked to shed some light regarding his decision to field the lesser-known players, Clark justified his move by saying that he wanted to give the other players game time, so that they too could adapt to his coaching philosophy.

He further said that he was impressed with the team’s performance, adding that what had moved him the most was the fact that three of their four goals had been scored by players who were not regulars. Mokgakolodi Ngele scored the first goal seven minutes into the game.  Thobani Mncwango scored the second with a header, following a square pass from Edwin Gyimah 10 minutes into the last half.

Mncwango completed his brace moments thereafter after a scramble within the box. Tumelo Khutlang scored the fourth with a header late in the game. Ngele was nominated Man of the Match. He was presented with a trophy after the game. The Nedbank Cup last-16-round matches will be played over the next weekend, 22 and 23 February.