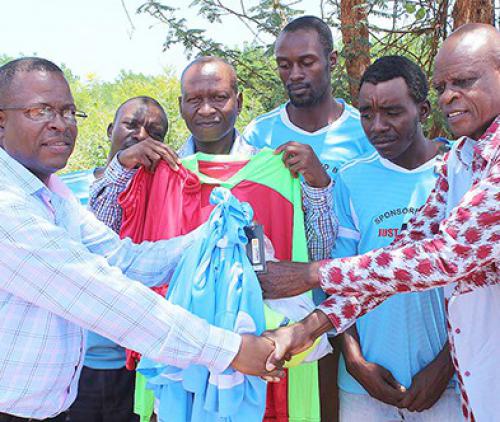 Mr ME Radzilani (left) hands over the kit to the chairman of the club, Mr Solomon Mudimeli (right), while Mr TS Mmbi (third from left) and some of the team players look on.

Thulamela Senior Citizens FC will no longer play their league games in tattered soccer kit. A local businessman, Mr Mulatedzi Nemaguvhuni, the managing director of the Shayandima-based electrical company, Just Fix Electrix, came to their rescue when he decided to sponsor the team.

The ceremony during which the sponsorship was officially launched was held at the Thavhani grounds outside Thohoyandou on Sunday morning. During the ceremony, a representative from the company, Mr ME Radzilani, handed over a complete soccer kit valued at R7 000 to the chairman of the club, Mr Solomon Mudimeli. According to Radzilani, his company’s policy was to plough a fraction of their company’s income back to the community.

The chairman of the club, Mr Solomon Mudimeli, said that the sponsorship would go a long way in boosting the players’ morale.

The club was founded in 2017. Some of the founder members include Tovhowani Ligudu, Tokyo Mukwevho and Shoes Tshilate. The club is affiliated with the Vhembe Interdepartmental Soccer League and the club is based at Maniini village. They use the Maniini All Blacks grounds for their home matches.

Mudimeli further indicated that the aim of forming a club was to keep the senior citizens away from health practitioners.

A representative from the local royal family, Mr TS Mmbi, stated that companies such as Just Fix Electrix were rare in his area of jurisdiction. He appealed to the company to continue to lend a helping hand to the needy.