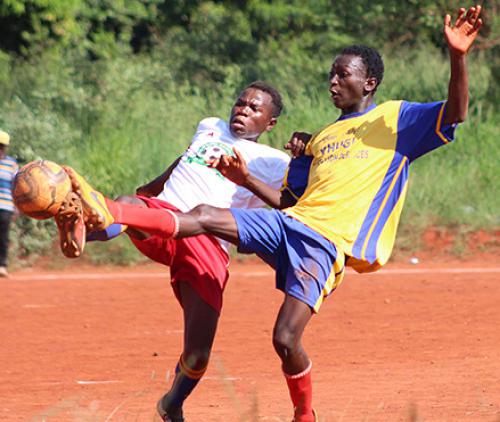 Zwidofhela “Ndoro” Musandiwa of United Brothers (right) and Pfunzo Ratshili of Happy Boys in a tussle to win the ball.

Zwidofhela “Ndoro” Musandiwa of Gwamasenga United Brothers was a marvel to watch when his team beat Duthuni Happy Boys 1-0 in their MMK Administrators Soccer League match at the Gwamasenga grounds on Sunday.

The game was equally contested in the first 20 minutes, with the teams creating and wasting scoring opportunities. It took Happy Boys eight minutes to realize that it was not their day. Their playmaker, Kenny Mukwevho, received a neat pass from Khathutshelo Muvhali just outside the box. Instead of moving a few steps forward, Mukwevho chose to try his luck with a half volley from the edge of the box.

The ball missed the target by inches, much to the fans’ disappointment. That was a wakeup call to United Brothers. They regrouped from behind, initiating some promising moves from the middle of the park.

The boys were separated from men in the 26th minute. Ndoro Musandiwa went loose from the right corner, went straight to the box and unleashed a ground cutter. Khathutshelo Muvhali, the Happy Boys’ keeper, watched helplessly as the ball went beyond his reach.

Ndoro came close to scoring a brace in the 60th minute. His close-range attempt hit the crossbar and bounced outside the field of play.

The referee, Mr Masala Mathoma, flashed only one card in the game. Aifheli Malange was reprimanded for tackling Ndoro Musandiwa the rough way. Happy Boys effected two changes later in the game, but that did not change the complexion of the game.