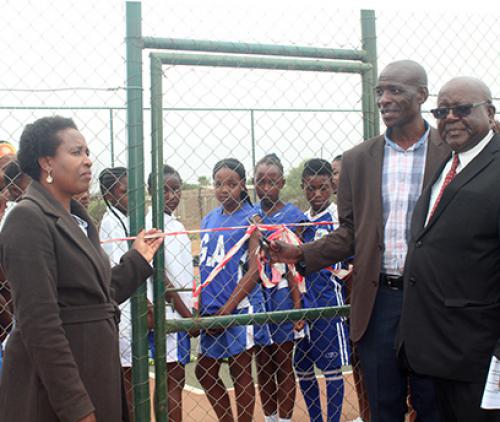 Photographed during the official opening are, from left to right, Jeaneth Mutheiwana, Cllr David Davhana and principal Cedrick Mphaphuli.

A new multi-purpose court was officially opened at the Mugidane Primary School last Friday. The court was built with a R250 000 grant from the National Lotteries Commission (NLC).

The chairperson of the NLC board, Prof Alfred Nevhutanda, explained in his message on Friday that the Lottery Commission supports sports and community development projects. He said that no proper sporting facilities existed in the area and especially young people suffered as they did not know where to go after school and during holidays.

The principal of the school, Mr Cedrick Mphaphuli, said that his school had produced good players over the past years, despite the lack of proper facilities in the area. He further stated that his school was committed to using the facilities effectively and that a lot of people would benefit from them.

Cllr David Davhana expressed his appreciation to the Lottery Board for the grant. “The donation will enable us to unearth hidden sporting talents. Our pupils will be able to compete with pride against other schools,” he added.  He also appealed to people to use the facilities in a proper manner. He said that the new facilities would lead to a reduction in crime, as the children now had place to play after school.

The multi-purpose court at Mugidane can be used for netball, tennis and volleyball. The NLC grant also made provision for soccer, netball and tennis kits and balls.