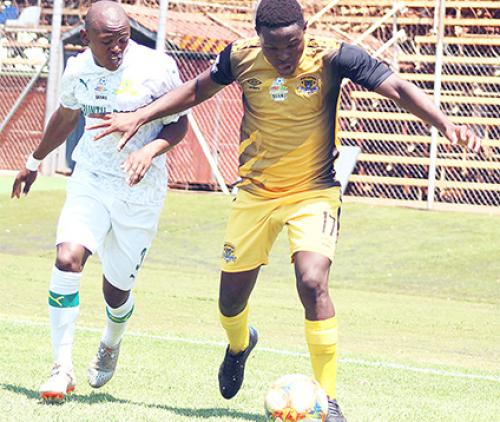 Selby Rapatsa of Black Leopards (right) protects the ball while pushing Buhle Mfodololo of Sundowns back.

Another blow for Diski Leopards

Things are quickly going from bad to worse in the camp of the Multichoice Diski Challenge Black Leopards. They continued to donate league points to their opponents last Saturday when they suffered a 0-2 defeat at the hands of Mamelodi Sundowns. The young Lidoda Duvha are still to win a league match this season.

Just like the rest of the teams, Black Leopards have played nine matches to date. They are languishing at the bottom of the log with 3 points. Their best results were the three draws against Kaizer Chiefs, Stellenbosch FC and Orlando Pirates. Asked what factors could be attributing to their downfall, the team’s head coach, Mr Mongezi Bobe, said that his team’s problems would only be solved if they managed to acquire the services of two natural strikers.

He stated that all the departments were well beefed, with the exception of the striking force. He further stated that most of the matches they lost were as the result of poor finishing. “You see, once we concede [a goal/s] it becomes difficult for us to fight back as scoring is still a challenge with my strikers,” he said. He reiterated the fact that they could have sealed their game against Sundowns in the first half if it were not for their strikers who seemed unable to follow through.

The visitors from Pretoria were down and out in the first half. Instead of capitalizing, the Leopards’ forwards fumbled with the ball at the goal finish time after time. It was only after Sundowns introduced Rian de Vries and Buhle Mfodololo for Sphesihle Ncongco and Keegan Allan that Sundowns started to play attacking football.

Their opening goal came 12 minutes into the last stanza. Their left winger, Neo Mphuti, gave the ball the final touch, following a scramble within the box. Promise Mkhuma scored the Sundowns’ second goal later in the game.