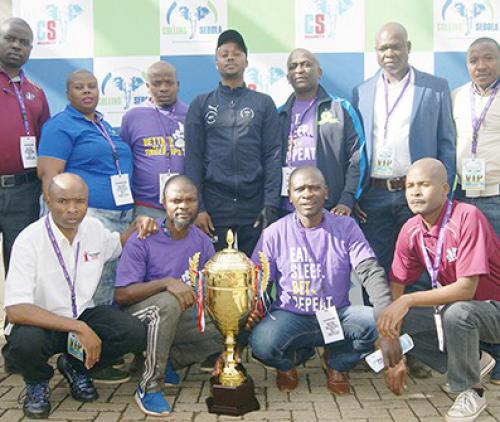 Some of the team representatives and stakeholders, phographed shortly after the event.

“We pride ourselves on your good work in communities”

“The kind of work that Mamu Community Development and teams are doing is very important - therefore, do not look down on what you are doing and think it is only something small.”

A former president of the South African Football Association (Safa), Mr Kirsten Nematandani, was speaking during the launch of the Collins Sebola Group Pre-season Cup 2019. The event was held at the Elangos Wedding and Function Venue outside Louis Trichardt along the N1 on Saturday.

“I am instilling a sense of motivation among all soccer teams and the organisation hosting this tournament,” said Nematandani. “Take note that courage is not the absence of fear, as the wise would say. Just be all ready, for when fear rises its head, you need courage to keep going.”

He reminded the guests that a contribution is like the little finger on the hand; however small it is, it has a valuable purpose or duty in the whole operation of the hand.

He added that Mumu's general secretary, Mr Jafter Mamugudubi, was able to secure sponsorship because he had the courage, humility and respect. “Those are the characteristics that open the doors of sponsorship for him and they also keep him going,” Nematandani said.

The winning team in the Collins Sebola Group Pre-season Cup 2019 gets R25 000 and football equipment and a lot more cash prizes are up for grabs for all the other teams.

The matches will be played on 22 and 24 September at the Mabaleng Sports Centre in Tshiozwi village. For more information, phone Mamugudubi on 082 536 6309.