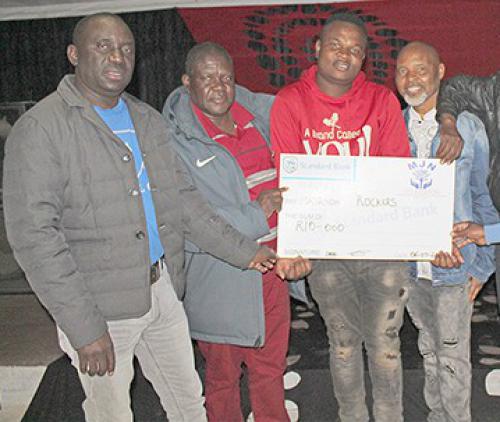 Matanda Rockers were crowned as champions of the MJN Foundation Soccer tournament, when they beat Greenway Academy 3-1 in the final match at Tshiozwi on Saturday.

During the prize-giving ceremony at Tshiozwi, Mr Neels Kruger of Total Capricorn N1 stated that the company would continue to sponsor the rural soccer tournament next season.

He stated that the sponsorship amount would increase next season.

According to him, he wanted to serve the community and that was why the company decided to sponsor the event. "We are part of this community and we are doing this to support local people," he added.

He praised the committee that managed the sport well and encouraged community members to keep it up to produce talent among the youth.

The champions of the MLFA teams were Chris United. They received R5 000, a trophy, gold medals and a new soccer kit. The runners-up, Ravele Black Dragons, collected a new soccer kit and silver medals.

Rockers were first to open their account via Given Sidimela. Aluwani Nedzamba scored his team’s second and third goal. Greenway scored their only goal late in the match through Marubini Manyane.

Oscar Ramantswana, the captain of Chris United, the champions in the MLFA, receives a cheque of R5 000 from Mr Solomon Setago of Total Capricon N1.