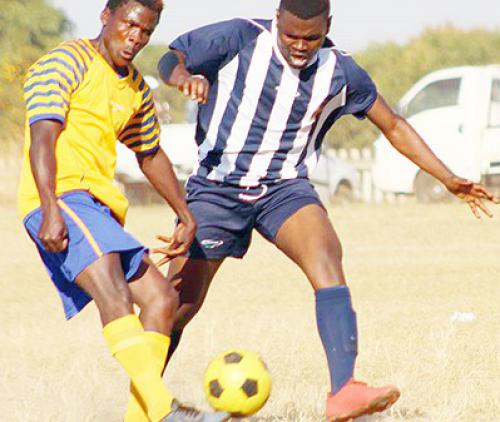 Vallen Mudzanani of Water Sand (left) and Rhifo Chauke of Bombers are in a tussle to win the ball.

Tshamutshedzi Water Sand brutally walloped Tshilonwe Young Bombers 4-1 in the final of the Boy Nemakonde KO competition at the Tshifudi Stadium on Saturday.

They meant business from the first whistle and that they scored their first two goals within the first five minutes of the game was not surprising.

Water Sand took only three minutes to open their account. They were awarded a corner kick that was taken by Thama Raudzingana and Israel Mudau, the team’s captain, then headed home after a scramble within the box. The goal was an inspiration to the Water Sand strikers. Thama Raudzingana forced his way through the Bombers’ defence and blasted in a rocket to make it 2-0 in the fifth minute.

Raudzingana was also was the first player to go into the referee’s book. He tackled Shadrack Mashaba of Bombers from behind.

The keeper of Bombers, Kanakana Makhale, committed a colossal blunder in the 58th minute. He miskicked the ball just outside the box and Dzivhuluwani Mbedzi, the Water Sand overlapping midfielder, easily tapped the ball into an empty net. Young Bombers did not lose their fighting spirit, although time was fast running out for them. They pulled one back through Shadrack Mashaba in the 74th minute. Mashaba forced his way through the defence of Water Sand and beat the keeper with a close-range half volley.

Young Bombers lost hope after Water Sand scored the fourth goal. They were awarded a penalty after a defender of Young Bombers handled the ball within his own penalty box. The referee, Mr Philip Tinyani, did not hesitate to point at the white spot. Vallen Mudzanani scored from the penalty spot to bring the final score to 4-1.

Godfrey Nephawe of Water Sand controls the high ball while Christopher Thangwana of Bombers kicks him in the abdomen.