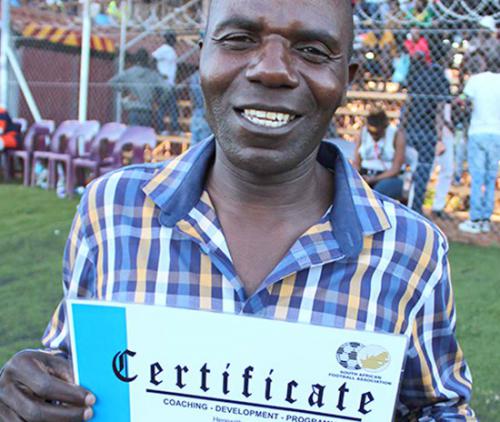 After successfully coaching several football teams without the relevant qualifications in the past years, a resident of Tshapasha village in the Dzimauli area, Mr Phophi Reginald Musetha, has finally qualified as a coach.

According to him, he developed a love for football at a tender age. At that stage, his uncle, Mr Titus Phungo, was the managing director of the club Gogogo Moon Rovers.

Musetha’s coaching career dates to the early nineties when he was appointed the head coach for Tshapasha Western Chiefs. He guided Western Chiefs for three solid years before moving to Tshibvumo Young Stars, where he stayed for 11 years.

During his stay at Tshibvumo Young Stars he produced a professional player, Mpho Dagada. Dagada played for the now-defunct Dynamos FC and Black Leopards before hanging up his boots.

Following his success at Rambuda Secondary School, the 47-year-old Musetha moved to Murunwa School of Excellence, where he worked as the school’s soccer coach for three years. Musetha, a prison warder at the Kutama Sinthumule Prison, also works as a sports analyst at Makhado FM community radio station.

Although Musetha is proud of his history as a soccer coach so far, he felt that it was not good for him to work without the relevant qualifications. That prompted him to attend the coaching-development programme conducted by the South African Football Association (SAFA) in Pretoria last month. Following his success in the programme, Musetha was presented with a Level D Coaching License last week.