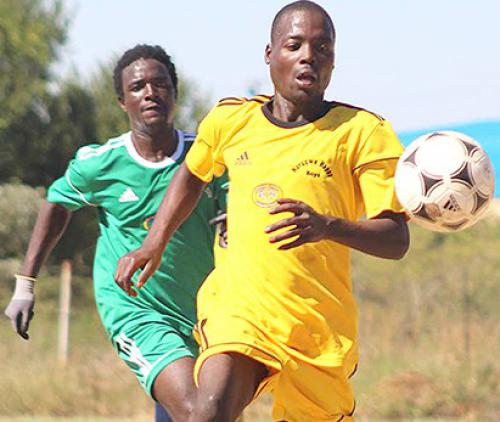 Elite made their intentions clear from the onset. Their midfielders kept the opposition defence running for cover for the better part of the first half by distributing dangerous passes to the strikers.

They knocked on the Boys’ door for the first time in the eighth minute. Their top goal scorer, Ndamulelo Netshidongololwe, went loose from the left corner and beat one defender before trying his luck with a half volley. The ball hit the woodwork and landed outside the field of play for a goal kick, much to the fans’ disappointment.

As if that was not good enough to scare off the opposition, Freeman Mmboi came close to scoring moments later. He received a neat pass from Mashudu Nethengwe and hesitated for far too long to unleash within the box until he lost possession.

Happy Boys gained momentum towards the end of the first half. Their strikers let them down by shooting aimlessly at the goal finish.

The Boys were separated from the men in the 69th minute. Ndamulelo Netshidongololwe blasted in a rocket from close range, following a mix-up within the box. Happy Boys did not throw in the towel although time was fast running out for them. They created several moves from behind, but it was difficult for their strikers to find their way through the defence of Elite.

Elite received a cash prize of R7 000 and bronze medals during a ceremony at the stadium shortly after the final game. (See full report elsewhere in the paper).