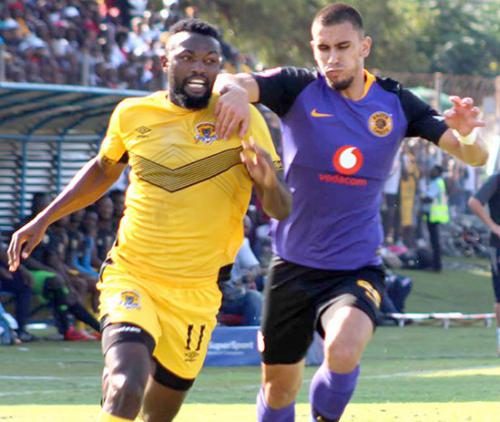 Mwape Musonda of Leopards (left) and Daniel Cardoso of Chiefs wrestle to win the ball.

No relief for Black Leopards

Although they managed to hold Kaizer Chiefs to a 1-1 draw in their Absa Premiership League match at the Thohoyandou Stadium last Saturday, the future of Black Leopards as an affiliate of the Absa Premiership Division is still hanging in the balance.

Nothing much has changed on the log standings as Lidoda Duvha are still in in the 12th position.

The Thohoyandou outfit have deposited 26 points into their league account so far. Unlike most of the teams, who have played 26 matches, Black Leopards have played 25. Three teams, Chippa United, Baroka FC and Free State Stars, are two points behind Leopards. Maritzburg United, who are languishing at the bottom of the log, have 20 points.

Black Leopards must win at least two of their remaining five matches in order to be safe from the relegation axe. A look at their remaining fixtures shows that the local lads have a steep mountain to climb. They still must play the title chasers, Mamelodi Sundowns, at home and away as well as Cape Town City, Amazulu and Maritzburg United.

The only consoling factor for Leopards is that three of their remaining fixtures will be played at the Thohoyandou Stadium, a venue they regard as their “slaughter house”. Their home matches will be against Mamelodi Sundowns, Maritzburg United and Cape Town City.

The team’s head coach, Mr Dylan Kerr, is adamant that Leopards will be campaigning in the country’s elite division next season. He reiterated the fact that it will be difficult for teams that will play them at the Thohoyandou Stadium to go back with full points.

Kaizer Chiefs were the first to open their account last Saturday. Aro Andrianarimanana beat the Leopards’ keeper, King Ndlovu, with a ground cutter. Leopards fought back and scored when Lifa Hlongwane’s header hit the back of the net 12 minutes afterwards. Hlongwane was nominated Man of the match.