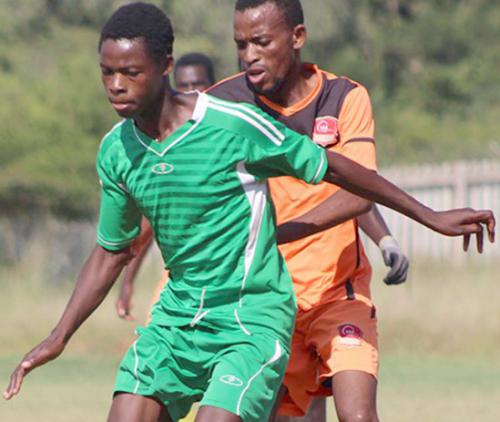 Thivhulawi Khalushi of Western protects the ball, while Aluwani Makhura of Elite pulls him back from behind.

Elite too strong for Luvhimbi Western

Luvhimbi Western will not take part in the semi-final stage of the Thulamela Mayoral Cup Tournament. This follows their 1-5 defeat at the hands of Tshilavulu Elite in their quarter-final match at the Makhuvha Stadium last Sunday.

It took Elite only nine minutes to open their account. Ndivhoniswani Tshikalange was on target, following a neat pass from Livingstone Mmbadi. Western started to panic after Elite’s opening goal. They were severely punished for that. Tshikalange made his presence felt again by beating the keeper with a ground cutter moments later.

Western lost shape in the middle of the park, thus giving Elite more space to dictate terms within their territory. In the 34th minute, Elite increased the margin to 3-0. Ndamulelo Netshidongololwe, the team’s captain, dribbled past two defenders and sent the keeper the wrong way.

Netshidongololwe was warned with a card for dangerous play soon afterwards. Western’s solitary goal came four minutes before the half-time whistle. Nnyadzeni Matambila was on target after beating the offside trap.

Western were reduced to 10 men five minutes into the last half. Vhahangwele Ramukakate was given his marching orders for obstructing the keeper. Western looked hopeless after the incident.

That gave Elite a good chance to score two beautiful goals within a short space of time. Nesthidongololwe completed his brace after beating the keeper with a neat header. Their third goal was scored by Mashudu Nethengwe, who blasted in a rocket late in the game.