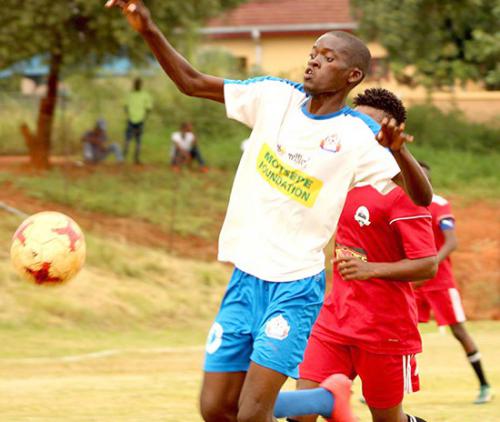 Kurisani Chauke of Hotspurs is focused on the high ball, while Gift Nemutandani of TRON is on his heels.

Spurs too hot for TRON

Giyani Hotspurs enhanced their chances of escaping the relegation axe at the end of the season by beating Tshakhuma RO Nandilani (TRON) 1-0 in their ABC Motsepe League match at the Tshisaulu Mmbengeni Kone Sports Centre on Sunday afternoon.

Hotspurs’ head coach, Mr Ishmael Maluleke, said that he was a relieved man after his team managed to collect the three vital points away from home.

He further stated that winning away matches gave them hope that they would soon move out of the relegation zone. Spurs are languishing at the bottom of the 16-team league log.

TRON enjoyed more ball possession throughout the first half, but their strikers seemed to have forgotten their scoring boots at home.

The visitors from Giyani did not lose hope, even though they lost their playmaker, Marvelous Makwakwa, through injury 18 minutes into the game. Makwakwa was taken to the nearby clinic with a broken leg from where he was referred to the Tshilidzini Hospital. Makwakwa was replaced with the left-footed Shaun Shimange.

Fhulufhelo Nemusumani, TRON’s centre back, was lucky not to see red after tackling Fumani Mabaso from behind in the 24th minute. Realizing that there was nothing to fear, Hotspurs approached the last half with more self-confidence, with their midfielders distributing dangerous passes to the strikers time after time.

The boys were separated from the men in the 78th minute. Shaun Shimange beat the offside trap and blasted in a rocket from inside the box.

TRON effected three changes to their starting line-up soon afterwards, but that did not change the complexion of the game. Hotspurs played defensive football for the remaining part of the game.