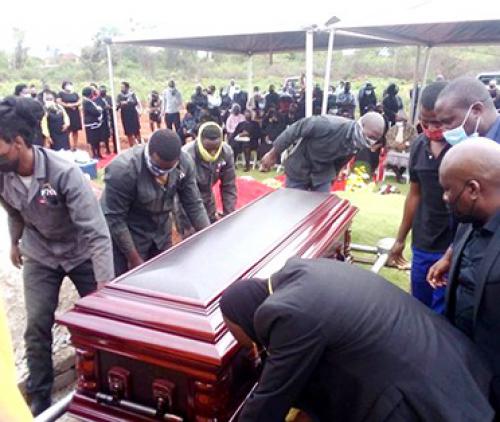 A former police officer who later became an advocate and advisor to many political leaders, Takalani Esrom Nematswerani (56), died after a short illness and was buried in Thohoyandou last Saturday.

As a police officer, Nematswerani earned respect for the manner in which he investigated and later arrested a Zambian citizen, Frank Kutumba Stephen Ilubala Kwezi. Kwezi and his wife ran a pyramid scheme in Thohoyandou and disappeared with approximately R4 million. Kwezi was sentenced to 20 years’ imprisonment in 2004 and his wife received a four-year sentence.

During his tenure as junior police officer, Nematswerani used to attend classes at the University of Venda while wearing a police uniform. After obtaining his LLB Degree, he worked in different units of the SAPS, occupying senior positions.

In 2017, he resigned from the SAPS and joined the Department of Public Service and Administration in Pretoria as legal advisor of the then Minister of Communication, Faith Muthambi. When Muthambi left the DPSA in February 2018, Nematswerani clashed with some deputy director generals for speaking his mind during management meetings. He wrote a letter to Minister Senzo Mchunu, complaining about the ill-treatment he experienced in the DPSA’s legal office.

He continued working in that position with Minister Ayanda Dlodlo in 2018 and Minister Senzo Mchunu in 2019, until his contract expired in 2020.

Before leaving his DPSA office, a security officer who was close to him asked him about his plans for the future. He answered that he was going to open a legal office in Thohoyandou. “When I retire, I will be a preacher of Good News (Pastor) to make sure that my reputation remains clean until I die,” he said.

He continued to open a legal office in Thohoyandou, where he worked alongside other advocates, such as Adv Nkhangweni Ramugondo.

Adv Ramugondo described Nematswerani as a down-to-earth colleague but someone who never surrendered to any case. “He would answer all legal queries without hesitation,” he said.

He is survived by his wife and six children.