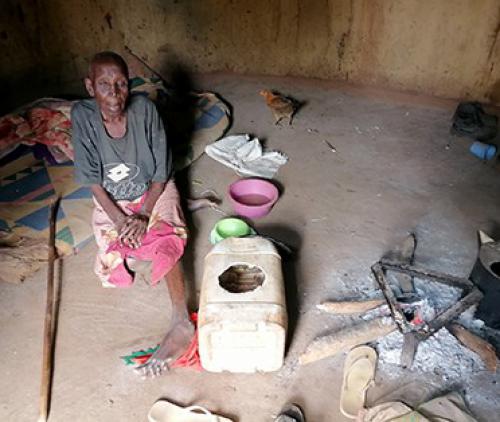 Granny Mukondeleli (103) sits next to the fireplace in her rondawel. She is blind, going deaf and struggles to walk. Photo: Bernard Chiguvare.

Granny of 103 wishes to have her own RDP house

A poor family of 11 from Tshitambe village in Mutale say they have been trying for a long time to apply for an RDP house but with no luck.

Hundred-and-three-year-old Leah Mukondeleli shares her two small mud rondavels, constructed in the early 1990s, with her 56-year-old son, Isaac Ndou, his wife, and eight grandchildren, who all cram into this scant space. The thatched roofs are deteriorating and leak on rainy days.

Leah is blind and her physical and mental health is deteriorating by the day. She is now also losing her hearing, so she sits alone on a mat in one of the rondavels for most of the day with Bhobi, her dog, always lying by her rondavel’s door. He guards her day and night.

The village consists of about 50 households and is situated in a deep rural area. No-one in the family works because no work opportunities are anywhere nearby, so they live only on government grants.

Leah says they do not enjoy living in these conditions anymore. “I wonder why the municipality is failing to build me an RDP house. At this age, I cannot work for myself and build a house. I have been trying since 2000 to apply for an RDP house but never heard a word from the municipality. The grant money we live on is not enough to build a better house for ourselves,” she said.

When Limpopo Mirror made a few enquiries about Leah’s application, the Thulamela Municipality said they did not have any application for an RDP house in her name on their system. Isaac also claims to have applied several times, but nothing seems to have come of it either. After some investigation, he was found to be sharing the same ID number with several other people. They told him that he would first have to go to the Department of Home Affairs to rectify the problem, then he could apply again.

“If Ms Mukondeleli wishes to apply for an RDP house, she can do so, but she has to follow the procedures in her respective area,” said the spokesperson for the Thulamela Municipality, Tshiila Nndwamato.