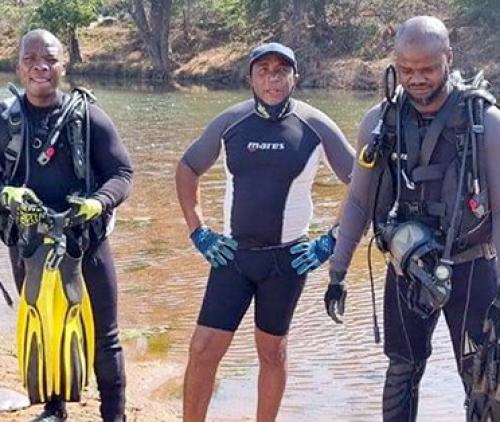 Police drivers after they had retrieved the body of local fisherman Patricius Netshituni (34) from Tshituni Tshafhasi. Photo supplied.

Mr Patricius Netshituni (34) from Tshituni Tshafhasi was unemployed, but this did not prevent him from making a meaningful life for himself and those close to him. He would venture to a local dam to fish, take some of his catch home and sell the rest at the village market.

On 12 October, he went fishing as usual with a friend at a local dam at Mahangani village. Netshituni ventured deeper and deeper with his fishing nets, aiming for the bigger fish. He must have lost his footing and his head went under water. The friend looked for him to resurface, but after a few minutes realised that Netshituni was not coming up, so he ran to the village for help.

The police called in their team of search-and-rescue divers, but when they arrived at the scene, darkness had already fallen, and the man was nowhere to be found. Community and family members slept next to the dam until the divers returned the next morning. Assisted by community members, they searched the whole area together, using a boat, but with no success. Neshituni’s body was only found the following day (14 October).

News about the drowning hit the village, as well as neighbouring villages, in no time via social media and soon the dam was swarming with curious onlookers. The dam is believed to have swallowed many people through drownings.

Police spokesperson Brig Motlafela Mojapelo confirmed the incident. “We have opened an inquest docket and ask residents again, especially children, not to venture into deep waters - either for fishing or swimming - as the rivers hold more dangers than drowning. They can also be attacked by water animals like crocodiles and hippos,” he said.

He appealed to parents to tell their children not to play alongside streams, dams or on riverbanks, or swim without the supervision of older people.