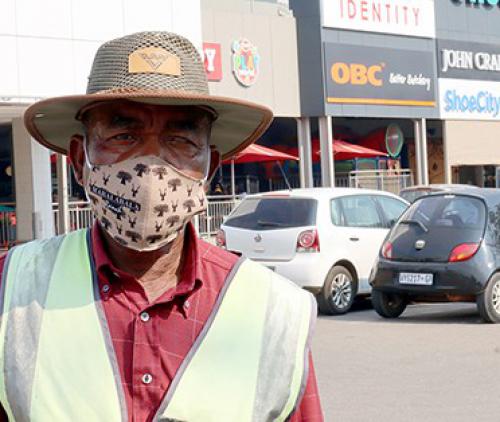 Edward Vele, a car guard at Makhado Crossing, who found the handbag and returned it to its owner.

Ms Khuliso Ndou from Musina was overcome with relief when a car guard returned her handbag, which she had lost at the Makhado Crossing in Louis Trichardt.

Ndou and her partner went to the mall on Saturday, 25 September, to do some shopping when they accidentally lost her handbag. “I wanted to go to Clicks to buy necessities for the baby. My boyfriend and I got out of the car and the baby started crying. We got really frustrated. Then we tried to put the baby’s seat inside a trolley, but it didn’t fit. The baby was very fussy and crying, so we left, forgetting my handbag inside the trolley,” Ndou said.

Only when they got to the toll gate on their way back to Musina did they realise her handbag was missing. They had no other option but to turn around and drive all the way back to the mall. They asked all the car guards if they had seen the handbag, but no-one had seen it. Then they went to the centre management to see if they could pick something up on the camera footage, but as luck would have it, the cameras were not working that day.

“We even looked inside the dustbins, but no handbag. Now we were just sour, thinking we had lost everything.” The handbag contained money, ID books and the baby’s clinic card.

Ndou was convinced that all was lost, and the couple returned to Musina with the baby. A day later, she received a phone call that restored her faith in humanity.

Edward Vele, a car guard at the mall, phoned Ndou, telling her that he had spotted the handbag inside a trolley on that Saturday afternoon. “I did not know where the owner was, so I later took it home with me,” Vele said. He lives at Mpheni village, near Elim.

“On Sunday, I opened the bag to look for a contact number and fortunately found a small clinic book with her cellphone number in it. I called her and we arranged to meet at the mall on Monday,” he said.

Ndou had the highest praise for Vele’s honesty. “All my belonging were still there. Nothing was missing, not even the money. I’m so thankful to him and when I’m in Makhado, I’ll never use another parking bay but the one that he guards,” she said.