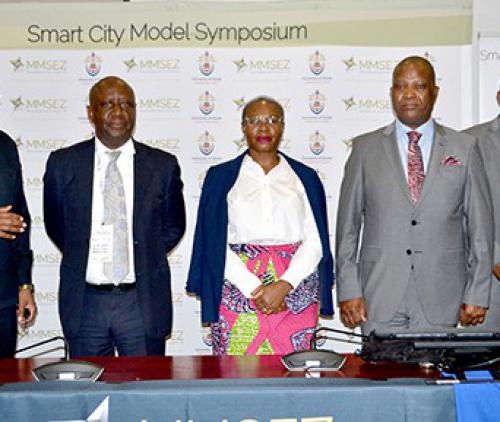 Acting Limpopo Premier and MEC for Public Works Roads and Infrastructure Namane Dickson Masemola addressed delegates who attended a symposium regarding the Musina-Makhado Special Economic Zone (MMSEZ) to discuss the success of the project and how best they can help fight poverty and unemployment through it.

Masemola was joined by the CEO for the Musina-Makhado SEZ, Lehlogonolo Masoga, the MEC for Limpopo Economic Development and Tourism, Thabo Mokone, University of Venda (Univen) Vice-Chancellor and Principal Dr Bernard Nthambeleni, Makhado Mayor Samuel Munyai and other councillors during the opening of the Musina-Makhado SEZ Smart City Model Symposium held on Thursday, 16 September, in the Univen research conference hall.

According to Masemola, the MMSEZ is a historic opportunity for growth and development, as well as an opportunity to contribute towards the eradication of the inherited stubborn challenges of poverty, unemployment and inequality.

“We hope that their contributions during the symposium will help to grow Musina-Makhado to be the new ‘smart city’, using the SEZ as catalyst. We urge the private sectors to take advantage of this project and invest in it. Opportunities are limitless, ranging from manufacturing, agro-processing, steel, and pharmaceutical, amongst others,” he said and added that the SEZ project was expected to have a visible and solid footprint in the rest of the SADC countries, as the project is nestled in an area that borders Zimbabwe, Botswana and Mozambique.

“The next trigger for economic boom will happen in the area of Musina-Makhado. The boom will be supported by the rich mineral deposits which are found in the area and across the rest of the Limpopo Province. The mineral deposits and mining value chain provide opportunities for local manufacturing, deepening industrialisation and enhanced inclusive economic development,” he said.

During the symposium, Dr Nthambeleni said that, as it was, Univen and the MMSEZ were in the process of signing five memorandums of understanding that would see the two parties collaborate in undertaking research, scholarly and commercial initiatives for mutual benefit.