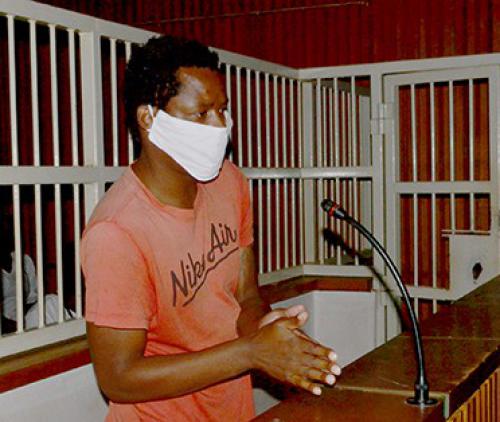 Mukhethwa Tshivhase (28), the man accused of murdering his mother, Caroline Tshivhangwaho Khomola, with a broomstick, photographed during his appearance in the Thohoyandou Magistrate's Court on Monday, 13 September. Photo: Silas Nduvheni.

The man accused of murdering his mother in Matangari-Tshiumoni village with a broomstick on 5 September after she “hid” their food in her room, appeared in the Thohoyandou Magistrate’s Court on Monday, 13 September.

The deceased, Caroline Tshivhangwaho Khomola (58), was asleep on the said night when her son, Mukhethwa Tshivhase (28), returned home in the early morning hours and demanded food from his mother. He allegedly accused her of hiding their food in her bedroom and allegedly became so angry at her that he picked up the broomstick and started assaulting her with it. The mother tried to run away but collapsed at the gate. She was taken to Donald Fraser Hospital where she was certified dead on arrival.

The case was postponed to 29 September to allow the family members to give their statements. Tshivhase already has a criminal record for previous offences. He was remanded in custody until his next appearance.