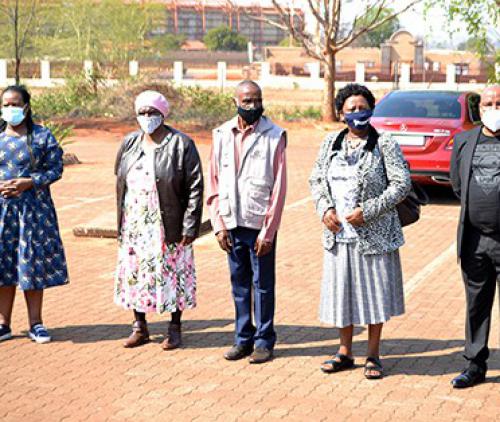 The mayor of the Joe Morolong Municipality in Kuruman, Dineo Leutlwetse (standing on the left), the wife  of the late struggle icon, Vhamusanda Tshikalange, Alice Tshikalange, Mr  Mulimisi Mahandana, Ms  Alice Netshitomboni and Mr Shadrack Tshikalange (on the far right) were photographed during the visit. Photo: Silas Nduvheni.

Struggle icon to be honoured in Kuruman

Plans are under way to turn the farmhouse in Kuruman in the Northern Cape, where struggle icon Vhamusanda Gilbert Ranwedzi Tshikalange and his wife were detained during the apartheid years, into a tourist attraction.

Representatives of the Joe Morolong Local Municipality in the Northern Cape visited the Tshikalange family in Tshififi village last week. The mayor, Princess Deneo Leutlwetse, described the visit as a fact-finding mission to see how best the municipality can honour the struggle icon.

“We are a small, rural-based local municipality in the Northern Cape, with few tourism attractions,” Leutlwetse said. The municipality believes that the house and farm in Kuruman where the Tshikalange couple were detained, could become part of a heritage route. “We are trying to preserve and restore the legacy that he has left,” she said. Leutlwetse added that to know more about the country’s political activists and heroes was important for a next generation.

If things go according to plan, the Tshikalange-Mphaphuli route will be officially opened in Kuruman at the end of September, which is Heritage Month.

Mr Shadrack Tshikalange, one of the sons of the late Vhamusanda Tshikalange, was delighted by the news that his late father’s efforts as struggle icon were finally recognized. “We were eagerly waiting for such recognition as our father was not just an ordinary person. Our father was banished and deported to a farm in Kuruman, and life was not easy for us as children. Our father also lost one of his wives during his banishment,” said Tshikalange.

Gilbert Ranwedzi Tshikalange was first imprisoned for three months and later banished to the northern Cape because of his refusal to accept the newly established homeland administration in Venda. Tshikalange worked in Johannesburg during the 1950s, where he joined the ANC. When his father died in 1963, Tshikalange succeeded him as a chief at Tshififi.

Tshikalange clashed with the government’s newly established Bantustan Authorities under whose jurisdiction he was placed and was sentenced to a period of three-month’s imprisonment. In 1966, Tshikalange was forcefully deposed and a traditional leader from another area, Mr Mudzhadzi Mphaphuli, was imposed as ruler of Tshififi.

When the Tshififi community rejected the imposed chief, the Bantustan Authorities banished Tshikalange. In 1969, he was deported to Kuruman in the Northern Cape. Tshikalange’s banishment lasted seven years, until it was finally lifted in October 1976. Tshikalange and his wife were restricted to an isolated farm where they were not allowed to have contact with anyone except the local police.

Vhamusanda Tshikalange (87) died on 12 February 2021. He was one of the active founders of the Congress of Traditional Leaders in South Africa (CONTRALESA).