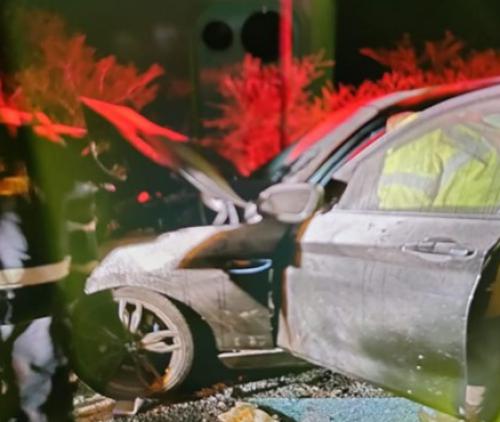 The BMW collided head-on with the VW on the N1 north. (Photo supplied.)

Five people died in an horrific head-on collision between two vehicles on the N1 south near Louis Trichardt on Thursday evening. Among the dead were two children. It was the second fatal head-on accident on this stretch of road within 48 hours.

The collision occurred around 19:30 between a VW and BMW sedan. Emergency services were on the scene within minutes after the accident and had to use the “jaws of life” to retrieve the injured and bodies of the deceased from the wreckage. One person was taken to the Louis Trichardt Memorial Hospital for treatment.

Mr Mike Maringa, provincial spokesperson for the Department of Transport and Community Safety, confirmed the incident and said that reckless driving might have been the cause of the accident. It is alleged that the driver of the VW was overtaking when he collided with the oncoming BMW. Both vehicles’ drivers were killed instantly, together with three passengers. A passenger in one of the vehicles who survived the crash was taken to the Louis Trichardt Memorial Hospital in a critical condition.

In the meantime, the MEC for Transport and Community Safety, Ms Mavhungu Lerule-Ramakhanya said she is worried about the increasing reckless behaviour of motorists on the region’s roads. She cautioned motorists to reduce speed and avoid overtaking unnecessarily. “It is not acceptable that every day we wake up to the sad news of people killed by reckless drivers who have no regard for the law. Our thoughts and prayers are with the families of those who lost their loved ones in the horrific crash. We hope other drivers will learn from this and work together to reduce fatal crashes on our roads,” said Lerule-Ramakhanya.

By the time of going to press, the names of the deceased and injured had yet to be released.