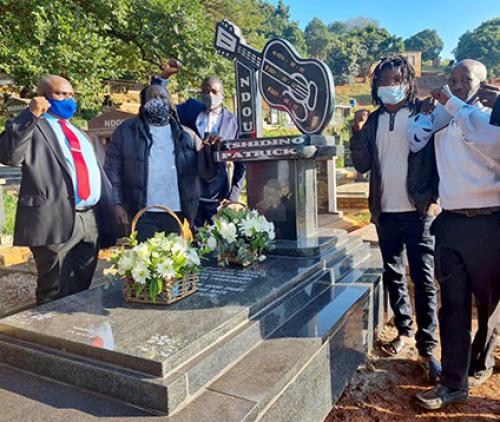 Tshidino will be remembered for his amazing creativity and talent

Tshidino Ndou, well-known musician, founder of the Vhembe Music Association and former spokesperson for the PSL soccer team Tshakhuma Tsha Madzivhandila, was laid to rest on Wednesday, 19 May, at Tshakhuma Mulangaphuma.

Ndou (47) died on Wednesday, 12 May, in the Pretoria West Hospital after a short illness. He is regarded as a fallen hero who was involved in the battle to uplift young people’s lives.

“The pain we experience as a family is more than words can express,” said Ms Muofhe Ndou. “We know that he is gone forever. We cannot disagree with God because He is the one who controls our lives and times. As Christians who believe in God, we cannot ask Him why it happened this way. Although it is difficult, ours is to accept and continue to pray, so that God can give us courage to pass through this difficult time.”

Makhado Mayor Samuel Munyai described Ndou as “a pioneer, a born leader and a man of vision”. He said that the entire community was left with heavy hearts and that Ndou’s music had found its place among the Tshivenda classics. “His music will always continue to promote the Tshivenda language and culture,” Munyai said. “We will remember him for his amazing creativity. His music lives on.”

Mr Humbulani Ramagwedzha from the Vhembe Music Association described Ndou as a highly experienced, professional, and talented artist. “Ndou was founder and secretary of our organisation and in him we have noticed a talent that encouraged many of us to work harder,” he said.

“We have lost an iconic singer. Ndou’s experience is still needed by the younger generation of artists. He is irreplaceable, because of his manner of singing, which was unique,” said Ramagwedzha.