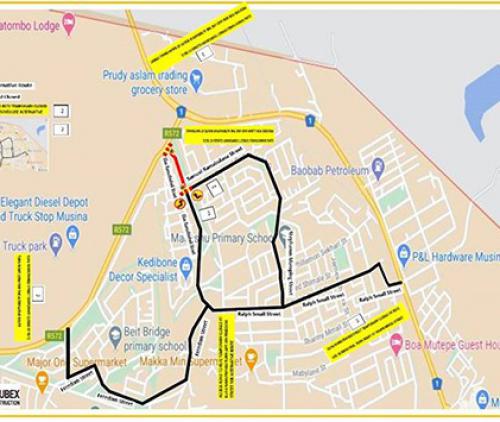 A diagram of the alternative routes to follow. Map supplied by SANRAL.

The South African National Road Agency (SANRAL) has warned the public and road users of the revised road configuration along the R572 (Pontdrift Road) between the N1 and the Sediva (Elegant) Diesel Depot & Truck Stop in Musina.

“Road users wishing to access the R572 from the Musina and Beitbridge directions, as well as from Elias Ramuthiveli Street, will be affected. This configuration will take place from 10 May 2021 until 31 January 2022,” says SANRAL in a press release.

R572 – N1 traffic will be accommodated as follows:

From the R572 in the direction of Musina, motorist must now turn left onto the deviation just past the Sediva (Elegant) Diesel Depot & Truck Stop and continue along the deviation until the new temporary intersection with the N1. Traffic heading for Beit Bridge will take the slipway lane to the left and merge with the N1. Those heading for Musina will turn right at the stop into the N1.

R572 - Elias Ramuthiveli Street traffic will be accommodated as follows:

From the R572 in the direction of Musina, road users will have to turn right just before the Sediva (Elegant) Diesel Depot & Truck Stop and continue along Freedom Street and left into Elias Ramuthiveli Street where it intersects with Ralph Small Street.

From Beit Bridge along the N1 in the direction of Musina, motorists must turn right at P&L Hardware into Ralph Small Street and continue until the intersection with Freedom and Elias Ramuthiveli Streets.

From Musina along the N1 in the direction of Beit Bridge, turn left opposite P&L Hardware into Ralph Small Street and continue along Ralph Small street until the intersection with Freedom and Elias Ramuthiveli Streets.

“SANRAL apologises for any inconvenience caused and appreciates the cooperation and patience of road users during the construction period. We furthermore appeal to motorists to approach construction areas with caution, to reduce speed and always be on the lookout for pedestrians and construction workers. We will endeavour to complete the work as soon as possible,” says Hennie Kotze, SANRAL project manager.