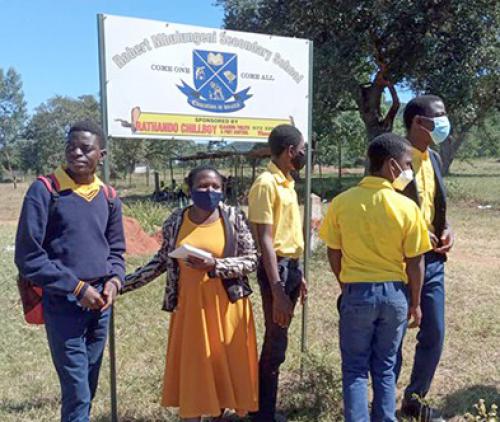 The embattled Robert Mbulungeni Secondary School is facing yet another battle. A site that the school had earmarked for development to provide in its growing needs has been sold by the local traditional leader.

Way back in 1983, when the Robert Mbulungeni Secondary School was built, the community of Thengwe Thondoni in Mutale had a vision that the school would one day grow. Unfortunately, the school went through a bad patch and deteriorating infrastructure prevented any improvement in academic results.

Currently, the school buildings are in a dilapidated state, with paint peeling off and many windows broken. The school governing body (SGB) is trying to rectify the situation and has reached out to the Department of Education and the National Lotteries Commission for assistance.

In one of the latest setbacks for the SGB’s plans, a site that they had earmarked for further development has been sold to a businessman by the local traditional leader. This has resulted in an ugly standoff between the traditional leader and the community.

SGB member Tshitangoni Raluruli said they were surprised when they were informed by the traditional leader that a new development was being planned on the “school” site. “Where will we build our new classrooms if we get funding? We know that our people need jobs, but we should not compromise our children’s future because of this development,” he said.

Raluruli said that they were not against development and did not want to oppose the traditional leadership, but they felt that consultation should have taken place. He said that they had already cleared the area and erected a fenced around the site.

Traditional leader Thanyelani Nemutanzhela said this was a misunderstanding. “We consulted the relevant stakeholders before a decision was taken to sell the portion to a businessman. We are a poor village, and we thought a complex here would create jobs for our people,” he said.

Nemutanzhela said the area had become a haven for criminals who hid there before breaking into the school and the traditional authority’s offices. He said that another site existed where the school could expand and called upon all involved to come together and chart the way forward.