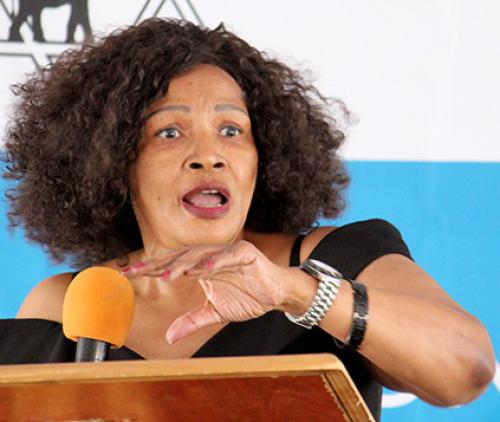 Professor Rudo Mathivha addressed guests during a ceremony held in her honour by the Lemba Cultural Association (LCA) at Rondebosch Farm outside Louis Trichardt last weekend.

The internationally acclaimed professor Rudo Mathivha was honoured by the Lemba Cultural Association (LCA) for her achievements during a ceremony held for her at Rondebosch Farm outside Louis Trichardt on Saturday, 1 May.

Prof Mathivha is a specialist ICU paediatrician, a director of Critical Care Medicine at the Chris Hani Baragwanath Academic Hospital in Johannesburg and a winner of the Forbes Woman Africa Academic Excellence Award.

During the ceremony, Mathivha received tokens of appreciation from the LCA. According to Mutenda, Mathivha is not only a hero in Vhembe and South Africa but recognised as a hero over the whole of Africa. “Young people from the province must emulate what Mathivha has achieved,” he said. “Mathivha is fearless and ambitious, hardworking, determined and destined for success against all odds.”

Mathale said it was very exciting to be in the company of an African icon. Addressing Mathivha, he said: “Vhembe is indeed a place of successful people. What you have achieved did not come cheap, but through commitment. Your success is our success,” he said. “You have been born a star and worked hard. Please remember that you are now the mirror through which the young ones look at themselves, and continue to be a good ambassador. We are very proud of you.”

In response, Mathivha said that she was happy to see that she was not only appreciated in Africa, but also in Vhembe, where she was born. “I feel very honoured and happy for the support I am receiving here at the place where I was born. This is really an honour to me. It’s nice to know that, through all the chaos and burnouts, something good comes from it. By some grace - not even by ‘some’ grace but by God’s grace and through hard work,” she said.

“It is such a huge responsibility to be a role model to so many people around the country; not just in Limpopo, and especially to those in rural areas. I managed to make it today and stand here in front of you, in front of the Deputy Minister of Police and the many other guests. I want to say: love yourselves first, fight for what you want and for yourself too. But remember, fighting doesn’t always have to be loud or vocal, it can be as simple as being silent and choosing to prioritise your peace,” she said.