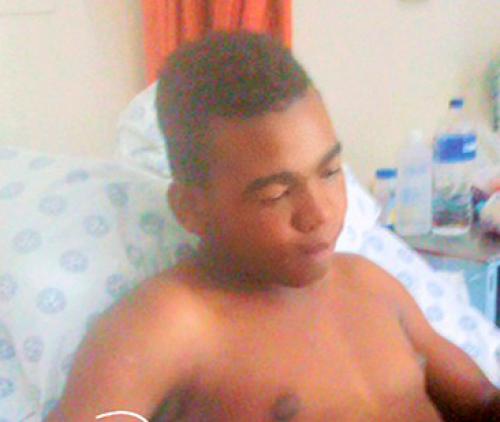 Orifha Maelekano, who was stabbed three times with a knife, in hospital. Photo supplied.

Boy (15) stabbed after argument over girl

A Grade 10 pupil of Jonathan Thifhulufhelwi Secondary School in Madombidzha was arrested for the attempted murder of a pupil of Litshovhu High, after he had allegedly stabbed the other boy with a knife in a heated argument over a girl.

Orifha told this newspaper that the argument had first started on Facebook, when he received a comment from Mukhethwa, warning him that he (Orifha) had stolen his (Mukhethwa’s) girlfriend. The boys live in Tshikhwani village.

On the morning of the incident, Orifha was allegedly accosted by Mukhethwa on his way to school, who allegedly slapped Orifha’s face with his open hand. When Orifha returned home after school that afternoon, Mukhethwa was waiting for him and a serious argument between them resulted in Mukhethwa’s allegedly stabbing Orifha three times in his side.

Orifha was admitted to hospital and discharged two days later (16th). When the family saw that his condition did not really change, they sent him back for treatment again on Monday (19th). He returned home that same day.

Mukhethwa appeared in the Tshilwavhusiku Magistrate’s Court on Monday, 19 April, on an attempted-murder charge. The case was postponed until 14 May 2021 and he was released on R1 000 bail. Police investigations continue.