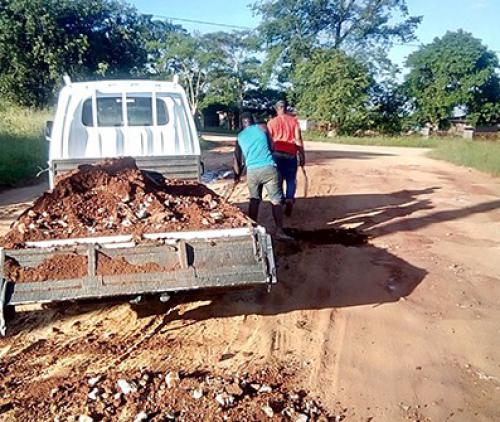 Members of the Vleifontein community volunteered their time to fix damaged streets.

‘Municipality has neglected us’

The community of Vleifontein spent Sunday, 10 January, repairing streets that were damaged by floods four years ago. They also complained about the streetlights, which have not been operating since November last year, and the high crime rate ensuing because the area is now in the dark.

The community is fed-up with waiting for the municipality to fix their streets and lights. Residents feel they have no choice but to fix the streets themselves now as they cannot wait for the Makhado Municipality forever.

The community representative, Mr Thomas Molefe, said the streets were badly damaged during heavy rains four years ago. “We tried to engage with our ward councillor and the municipal technical department, but the ward councillor doesn’t want to hear our complaints.”

Molefe thanked everyone who took part during the street-repair initiative. “We are happy with the response we got from our community members who volunteered their time to come and assist here today. It is very important for us to sustain our noble spirit of joining hands.”

“We don’t see the need to vote in the coming election. We’ve lost hope of getting better service delivery. Its best we take care of ourselves,” he said. “I decided to put aside everything because I know that the community also benefits from our efforts. I encourage other community members do the same by working hand in hand to create a better life for all.”

Makhado Municipality’s spokesperson, Louis Bobodi, said that their projects for Vleifontein in the current financial year included the rehabilitation of streets, upgrading of the stadium fence and ablution facilities. They also have monthly pothole repair programmes.