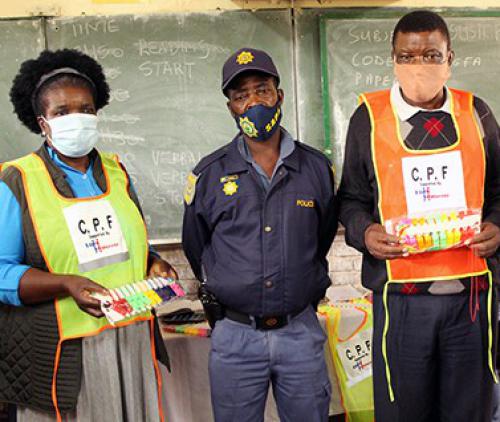 From left to right: Cllr Joyce Simangwe,W/O Foster Rambau, Jabulani Ramaru and Tshilidzi Phuravhathu during the handing over of the reflective jackets and whistles that were donated by the Elim Waterval Foundation to the Waterval CPF.

To support the fight against crime in the Waterval policing area, Elim Waterval Foundation handed over whistles and reflective jackets to the community policing forum (CPF) on 26 December last year at Waterval High School.

The whistles and jackets will serve to assist the police in monitoring the area during the night. The donations are meant to show criminals that the community and police are working together to reduce crime in the area.

The Elim Waterval Foundation has encouraged residents to start blowing the whistle on crime. The foundation and police have now resorted to using real whistles as essential tools to fight crime in the communities they serve.

W/O Foster Rambau from Waterval thanked the foundation for partnering with the Waterval SAPS. He confirmed that reflectors and whistles had been donated, which would be used by the CPF members. The reflectors will make them more visible to the communities while fighting crime.

Rambau said that, as a way of intensifying the war on crime, they had embarked on a programme to reach out to the communities through the traditional leaders and the churches. “We are very confident that, with the different structures doing their work, we will be able to beat crime. The more people who come forward to give the police information, the more we will root out crime,” he said.

Mr Tshilidzi Phuravhathu, communication officer of the Elim Waterval Foundation, said that the whistles should be used by members of the community in the fight against crime. “We realised that without involving the community and police it would be difficult to win the war against crime. The whistles will assist the community to work as a team. We need them to have a team spirit, so that they can assist each other to fight crime,” he said.

He said that members of the community had to blow their whistles as an alert signal, or a way of calling others when a crime was happening.