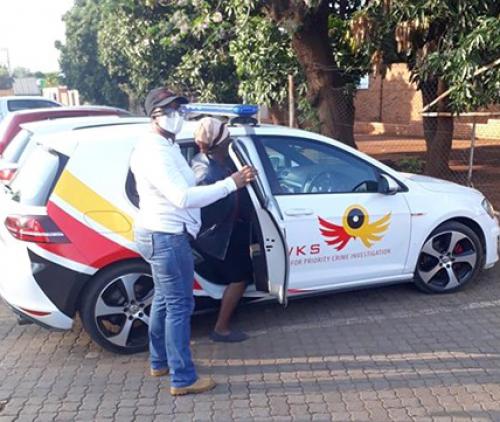 The 47-year-old Hlamalani Dorris Mashimbye is taken away by members of the Hawks’ Serious Corruption Investigation team, following her arrest on Friday. Photo: Limpopo Hawks.

The 47- year-old woman arrested on Friday for allegedly defrauding the Unemployment Insurance Fund (UIF) out of almost R3,2 million made another appearance in the Malamulele Magistrate’s Court this morning.

Hlamalani Dorris Mashimbye of Jilongo is charged with fraud, theft, and money laundering to the amount of R3,166 498 million.

According to Ms Mashudu Malabi-Dzhangi, regional spokesperson for the Director of Public Prosecutions in Limpopo, Mashimbye (a director of the Mtititi Drop-In Centre) was awarded a contract under the Extended Public Works Programme (EPWP) in 2019. She employed 240 people who, among others, cleared bushes from cemeteries, schools and along roads in the community of Mtititi, Lombard and Merwe.

“It is alleged that the accused terminated the employment contract with her employees in March 2020. Later during the lockdown period due to Covid-19, Mashimbye claimed UIF on behalf of the 240 employees from April to August 2020. The Department of Labour received complaints from former employees of the Mtititi Drop-in Centre that they did not receive UIF payments, despite the money having been paid to the former employer Mtititi’s bank account. The aforesaid employees did not benefit from the UIF,” said Malabi-Dzhangi.

Mashimbye case was postponed to 19 October for a formal bail application. Until then, she will remain in custody.