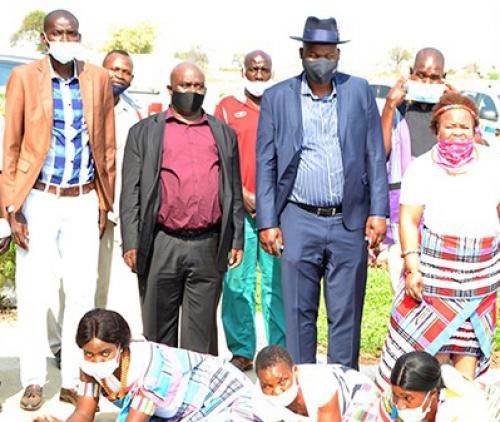 Thovhele Ndivheni Nesengani (standing, wearing a hat), flanked by Makhado Mayor Samuel Munyai (on the left near him) and Deputy Minister in the Presidency Ms Thembi Siweya (on the  right) wearing traditional minwenda.

Thovhele Ndivheni Nesengani described the recent visit by the Deputy Minister in the Presidency, Ms Thembi Siweya, as a promising gesture, which raises the hope that local communities will benefit from new development projects.

“The deputy minister and her entourage have given us an opportunity to present our case and they seemed to listen and promised to act positively. We are optimistic that some of our community initiatives and projects and even abandoned places like the Mphephu Airport in Vuwani will be re-furbished and opened very soon,” said Nesengani.

According to Nesengani, it was his wish to see the long-abandoned Mphephu Airport functioning again, which he hopes will help create jobs for the communities around Vuwani.

Deputy Minister Thembi Siweya, her entourage and the mayor of Makhado, Samuel Munyai, visited the residence of Thovhele Nesengani two weeks ago as part of an ongoing programme of engagement with traditional leaders.

Siweya also visited community-development centres in the area, such as the newly built Ndivheni Nesengani School and agricultural projects. She also visited the Mphephu Airport.

“Our President has called for all institutions and individuals to work together to contribute to the empowerment of communities and the socio-economic recovery of the country during this Covid-19 pandemic. Government regards the traditional leaders as important key stakeholders in the recovery of our economy and continuous development of communities,” said Siweya.

According Siweya, the Vuwani area lends itself towards agricultural development as the soil is fertile. They have plenty of land which, if utilized in a productive way, will help create jobs for the communities.