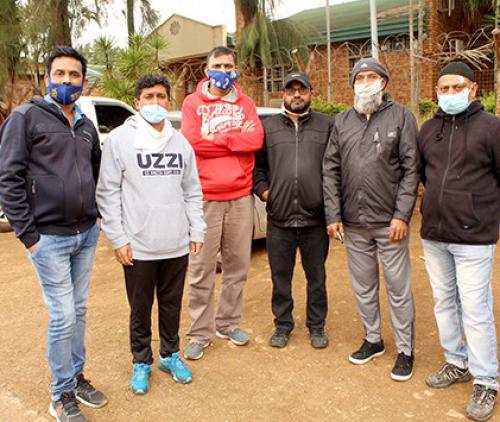 Some of the Indian traders photographed after a meeting with the police at Waterval Police Station.

Members of the Indian business community around the Elim area met with police representatives from Vhembe at Waterval Police Station last Thursday, complaining about the local police’s apparent inability to protect them against criminals.

The Indian traders felt that their businesses were being targeted by criminals. They said that businesspeople were constantly subjected to violent attacks by armed robbers in the Elim area.

Mr Nazir Driver, one of the traders, said that criminals had taken control of the area, once considered to be one of the safest places to live in the country. He said people were now living in fear, wondering who would be next to be robbed. He also questioned the police’s ability to fight the scourge of crime. “We are not safe at all here,” he said.

Driver said that business owners were fed-up with the crime and the thugs who had been terrorising their businesses. He said the community should strengthen the partnership that existed between themselves and the police. “We all have the responsibility to fight crime, and it is only through a united front that we could succeed,” he said.

Brig Eddie van der Walt, representing the SAPS, said they were doing all they could to curb crime. He said he was happy that the police had shown the commitment to work with the community in the fight against crime. Van der Walt called on everyone to give whatever information they had on criminal activities to the police.

“We are saying no to any form of crime in our area, and the only way we should be dealing with this situation is to involve everyone in the community in the fight against it,” said Van der Walt .