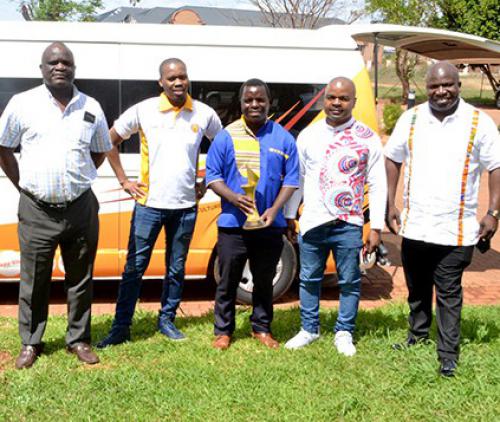 Ndivhuwo Luvhengo, better known as “Ndivhuwo NL”, won the trophy for best African Jazz song during the South African Traditional Music Awards (SATMA) awards. The award was handed over during a function held at the Thohoyandou Library auditorium on Friday.

SATMA embarked on a road show in Limpopo to award and recognise the winners of their traditional music awards.

The project coordinator of SATMA, Mr Mlamuli Mkhwanazi, said that SATMA would celebrate 15 years in existence on 5 December this year with a function in Mpumalanga. During this occasion, they will be honouring legends in the traditional music in all 34 categories.

He said through the annual traditional music awards, they tried to do away with tribalism. Luvhengo emphasized that no culture or tradition had a lesser status than any other, and all should be treated equally. “Hence we say - my culture, your culture, and one nation,” he said.

He added that, during their road shows, they were also giving aspirant young and old traditional artists listed in the database of the regional Department of Sport, Arts, and Culture (DSAC) an opportunity to showcase their talent.

The assistant director of the DSAC in the Vhembe District, Mr Vincent Netshivhodza, said that the SATMA awards would trigger other artists to produce more authentic traditional music. “We are proud of having a winner, which symbolises that the region has an abundance of talent that needs to be natured and harnessed,” Netshivhodza said.

Ndivhuwo NL said he was delighted to have received the award. He expressed the hope that the SATMA awards would continue to inspire Vhavenda traditional music artists to excel.