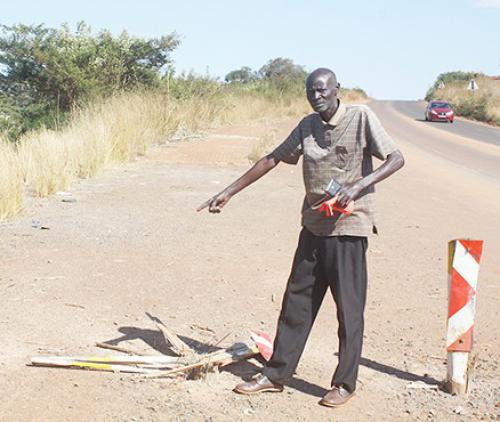 A representative of the traditional leadership of Ha-Radali village, Mr Philemon Radali, points to the place where the accident happened that left three Zimbabwean dead at the juction along the road between Ha-Radali and Gondeni villages outside Thohoyandou.

The traditional leadership and communities in Ha-Radali village near Gondeni are still baffled by the accident that caused three men, who may have been cigarette smugglers, to perish in a car crash last Wednesday night.

A representative of the Radali traditional leadership, Mr Philemon Radali, said they had heard an unusual bang sound that had occurred at about 23:00 that night and had gone out to investigate. On arrival, they found a vehicle that had overturned along the junction of the Radali and Gondeni public road. Three of the four unknown occupants were certified dead on the spot, while another was rushed to the Donald Fraser hospital.

“We suspected that the occupants of the vehicle did not know our road well as it was recently installed with speed humps. They jumped the first hump and did not notice there was another hump,” said Radali.

Limpopo police spokesperson Brig Motlafela Mojapelo confirmed the accident and said the police in Thohoyandou were investigating a culpable-homicide case. He said the deceased were confirmed to be Zimbabwean nationals and had been identified as Lovemore Mutema (30), Wiseman Mabena (26), and Nite Musa (27). The sole survivor of the accident, aged 30, has since been discharged from hospital and was detained for possession of illegal cigarettes. He will appear in the Thohoyandou Magistrate’s Court soon.