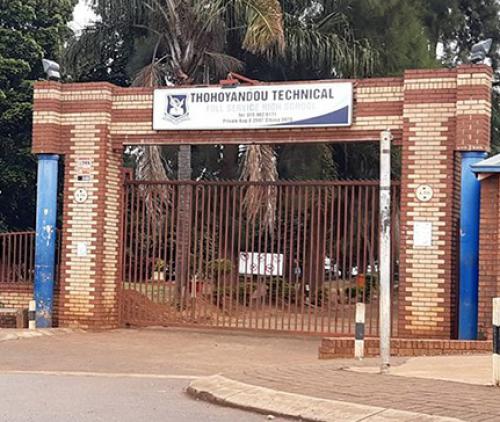 The entrance of Thohoyandou Technical High.

Another teacher tests positive for Covid-19 at Thohoyandou school

A teacher at Thohoyandou Technical High School tested positive for the coronavirus last Wednesday. Some of the staff members at the school have been placed in isolation.

At the beginning of the month, a teacher was tested positive at Liivha Combined school and the school was closed.

At Thohoyandou Technical High, the classes of Grade 12 pupils are continuing and only nine teachers were isolated and are still waiting to be tested by the Department of Health. The chairperson of the SGB, Ms Livhuwani Ravhuanzwo, said that the teacher had felt bad and gone to the doctor. The results came back positive last Tuesday.

She said that they were obliged to put a safety protocol in place, which included identifying direct contacts, sanitising the relevant areas of the school, and supporting any affected staff members. She says no need to panic existed, but any person experiencing symptoms should report them to the school.

One of the teachers, who did not want to be named, said the principal had told them one of their colleagues had tested positive for Covid-19. “We cannot risk our lives to work in these conditions. We need to test all of us, including the pupils, and the school must be closed temporarily,” she said. “We cannot allow learners to come to classes in this situation. We are not only doing this for us, but also for them and their families.”

The spokesperson for the Limpopo Department of Education, Ms Tidimalo Chuene, said that they had received a report that a teacher had tested positive and the Department of Health was the one to comment.