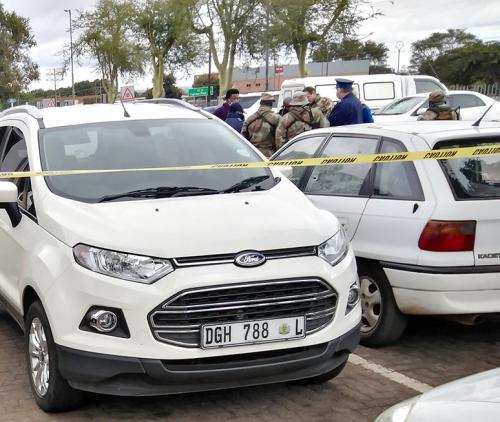 The scene of the armed robbery. On the right is the vehicle in which the 42-year-old woman was traveling. A buller hole through one of her vehicle's rear windows can be seen.

Limpopo police are still looking for a group of armed robbers who had robbed a 42-year-old woman of R17 000 in cash at the Makhado Crossing Mall in Louis Trichardt last Thursday.

According to the police, the woman parked her vehicle in the parking lot with the intention of depositing money at the ATM. As she got out of the vehicle, two unknown males pounced on her, held her at gunpoint and demanded money. They then grabbed her handbag containing R17 000 in cash and jumped into a Mercedes Benz vehicle.

The woman screamed for help, catching the attention of an on-duty police officer, and a shootout ensued between him and the suspects as they drove off. The robbers’ getaway vehicle, according to the police, was later found abandoned along the Ben Lavin road. The vehicle was full of bullet holes, as well as some blood believed to be that of a wounded robber.

“Are we no longer safe in Makhado? This is really sending a message that we will soon be in trouble at this mall, yet this is our favourite place for buying goodies,” said a visitor to the mall shortly after the incident.

The police have appealed to members of the public to come forward with information that might lead to the arrest of the suspects. They can phone Detective Captain Nkhensani Maluleke on 082 319 9638.