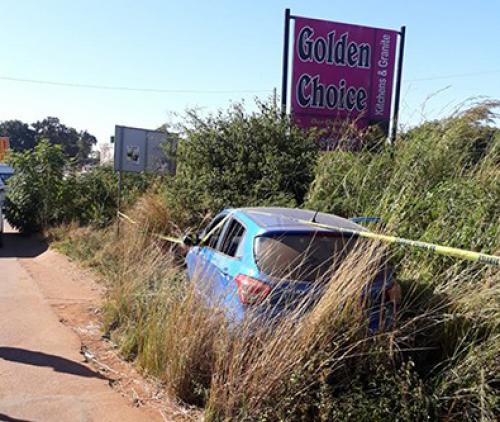 Seeing that their way had already been blocked by the police units from Thohoyandou at the intersection, the driver tried to maneuver the vehicle but lost control, landing in the adjacent shrubs. (Photo: Limpopo SAPS)

Five suspects were arrested at Matatshe after a shoot-out with members of the Thohoyandou cluster of the SAPS on Tuesday. They had allegedly committed an armed robbery at Muswodi earlier the day.

The suspects had allegedly robbed a supermarket of cash and airtime vouchers, hijacked the vehicle of a customer at gunpoint and then vanished.

The police were alerted and chased the suspects, who dumped the hijacked car and left with a getaway car, a Hyundai i10. When they arrived at the Matatshe junction, they found the road blocked, upon which they got out and ran away.

According to provincial police spokesperson Brig Motlafela Mojapelo, the suspects opened fire on the police and a shoot-out ensued, after which they fled. All were arrested, however.

According to Mojapelo, the police managed to recover a cash amount, five cellphones, two firearms and ammunition, as well as airtime vouchers during the arrest.

The suspects, aged between 30 and 34, can possibly be linked with other serious cases in and around the area. They will appear in the Thohoyandou Magistrate’s Court soon on charges of business robbery, possession of unlicensed firearms and ammunition as well as the possession of a suspected stolen motor vehicle.

The Provincial Commissioner of Limpopo, Lt-Gen General Nneke Ledwaba, praised all the members involved and commended them for their good work "in ridding this province of any form of criminality, especially violent crimes".