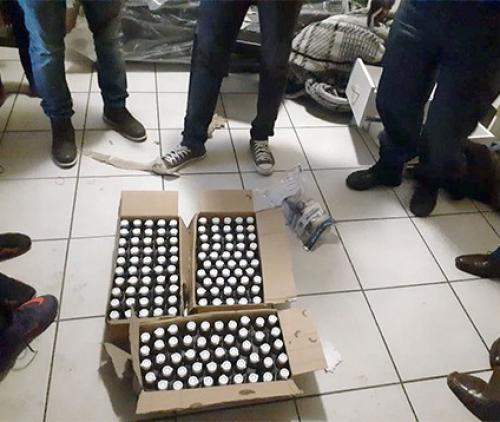 Five in court for unregistered medicine and money laundering

The five suspects who were arrested in Louis Trichardt on Monday after being found in possession of a large amount of cash and unregistered medicine all appeared in the Louis Trichardt Magistrate’s Court yesterday.

Three of the suspects, Stedmore Nau (23), Robert Mthandwa (28) and Andy Nare (40), are facing charges of contravening the medicine and related substances control Act, the possession of unregistered medicine and money laundering. Their cases were postponed until 21 May this year. The other two suspects, Mahua Mashitara (44) and Tinei Kateula (35), are facing a charge of money laundering and will appear in court again on 18 May. All five accused were denied bail.

The accused were apprehended during a joint intelligence-driven operation conducted by detectives, the police’s First Responder Team and crime prevention members from the Makhado SAPS Cluster.

“The team first pounced on three suspects at a townhouse in the Louis Trichardt CBD, after following information about their suspected illegal activities. During the search, 150 bottles of 500ml Adco-salterpyn medicine and a cash amount of R76 000.00 were confiscated. The other two suspects were arrested at nearby flats and another cash amount of R66 300.00 was seized,” said provincial police spokesperson Brigadier Motlafela Mojapelo.