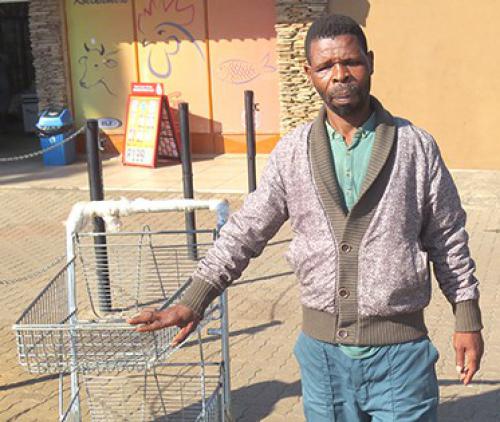 Andrew Munyai waits for anyone seeking assistance to load groceries into vehicles.

“Life will not be the same soon”

“I am not sure if life will be the same again anytime soon. Since the lockdown period, I am struggling to get food on the table,” said Mr Andrew Munyai, who used to guard and wash cars for some congregants at the Methodist Church in Louis Trichardt every Sunday.

Munyai (51) is not employed and has been making a living from those activities for almost a decade. “Before the lockdown, I was assured of getting around R100 for guarding the cars while people were worshipping. That money was enough for my food for the week. Now that I am not sure when the lockdown will end, I am really in trouble,” said Munyai.

On Tuesday, 14 April, Limpopo Mirror met Munyai at Soutpansberg Koelkamers, waiting to help shoppers load their parcels into their vehicles. It was early in the morning, around 08:00, but he was sweating.

“I cannot stay home and relax. Today I decided to be at this spot, hoping I would get people who needed my assistance carrying food parcels to their vehicles. So far, I have managed to load one bakkie, so I am now waiting for anyone,” he said.

Munyai said some shoppers gave him R10 or R20 after loading. He appreciates any amount offered.

Asked why he could not seek assistance from the relevant authorities, Munyai said he was sent from one office to the next and, at times, was advised to go to Vuwani, his rural home.

For him, going to his rural home is not an option. “I do not have money for transport. For me it is better if I go along to help people load their groceries into their vehicles,” he said.