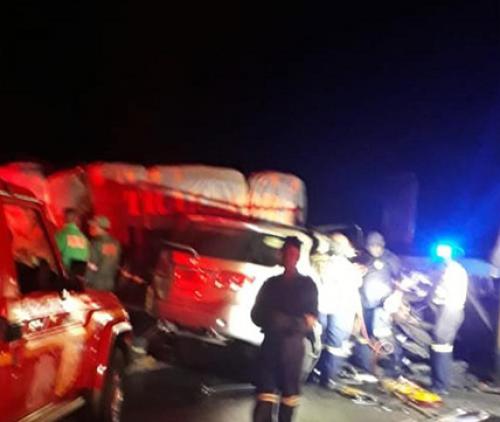 The scene of the crash which claimed the lives of seven people Sunday evening on the N1 between Musina and Beitbridge. Photo: Limpopo SAPS.

The police in Musina have registered a case of culpable homicide after seven people lost their lives when a Toyota Fortuner crashed into the side of a truck on the N1 between Musina and Beit Bridge. The accident occurred at around 21:30 on Sunday, 1 March.

According to provincial police spokesperson Brigadier Motlafela Mojapelo, the truck had reportedly just moved from the Petros Truck Stop, which is located next to the road, turning onto the N1 towards Beit Bridge when the Fortuner, coming from the northerly direction towards Musina, rammed into its trailer. “Emergency personnel had to remove the deceased from the wreckage of their vehicle that was trapped under the truck,” said Mojapelo in a press statement.

A baby boy of two years old, three females and three males died in the Fortuner, while the driver of the truck did not sustain any injuries. “The process of identifying the deceased has already begun as they are unknown at this stage. Police investigations into the circumstance of this incident are unfolding,” said Mojapelo.