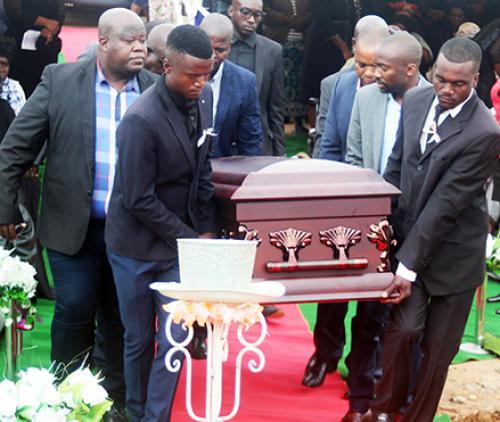 Family members carry the coffin of the late Elijah Musobi.

Community members, family and members of the Apostolic Faith Mission Church came in large numbers to pay tribute to the former education guru, Mr Elijah Musobi (80), who was buried at Tshiozwi a fortnight ago.

Musobi was a pioneer in the development of education in the Vhembe District. He died two weeks ago at his home after a long illness.

All the speakers recognized the good work that Musobi had done for the community as a leader and educator.

A family representative, Mr Nkhumeleni “Murema” Musobi, told the mourners that the family had accepted the loss although it was difficult to cope with. Prof Mawana Masenyane said that although the family, friends and church had accepted what had happened, it would be difficult to forget that this death had robbed the community of an energetic leader who had been full of zeal and courage.

She said Musobi would always be remembered for being the driver of opportunities within the communities where he had lived. “All we have to do is to give full support to the family to make sure that their loved one is given a dignified send-off. We are saddened by his untimely departure.”

She added that, instead of constantly shedding tears, "we must also go down memory lane and remember the good things that Musobi did for this community while he was still alive".

The chairperson of the local Sanco, Mr Shaft Matumba, also paid tribute to Musobi. “He was a great man who sacrificed his life to serve his people with distinction. He played a major role in relation to community development initiatives. We will always remember him for the contributions he made in our community.”