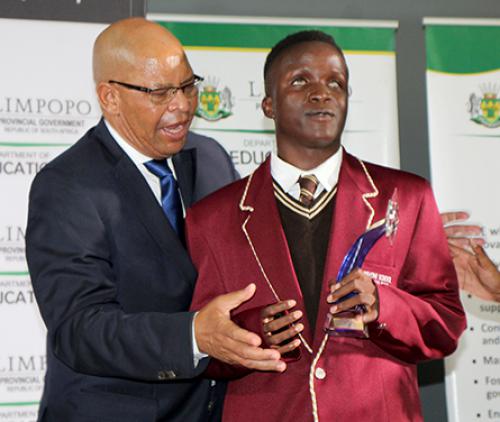 “Keep focused and you will always achieve”

“I lost my eyesight at the age of 12, but that did not stop my dream of studying law at any recognised university in South Africa,” says Tiyane Mbendzani, one of the top 2019 matric performers. Mbendzani matriculated from the Rivoni School for the Blind near Elim and his excellent marks placed him in the top 30 performers in the province.

The top-performing learner hails from Xigalo village, Malamulele. His mother died when he was four years old and at the age of 15 his father also passed away. His sister took care of him all the years until he completed his final matric exams last year.

“My sister is unemployed. She tried to do everything in her power to let me get an education, although I also got relief from a disability grant,” said the 19-year-old Mbendzani.

When he was in Grade 5, he lost his sight and could no longer be accommodated in a normal school. In 2012, his father enrolled him at the Rivoni School for the Blind. Mbendzani faced challenges both at home and at school, but these never deterred him from focusing, reading books and gaining knowledge.

“We had to go for long hours without food at home at times, and at school I really wanted to use braille to help me with my studies. This never stopped me from putting all my effort into my learning,” said Mbendzani. It all paid dividends and last year he obtained distinctions in economics, business studies, Xitsonga, history and English.

Mbendzani has been accepted by the University of Johannesburg to study law in 2020.

“It’s my dream come true. I love law,” he said, adding that he was not sure about his university fees. When Limpopo Mirror spoke to Mbendzani, he was waiting to go for an interview for a bursary offered by the Phalaborwa Mining company.