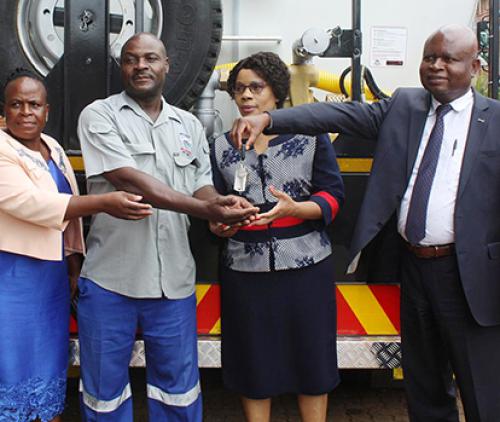 The executive mayor of VDM, Cllr Dowelani Nenguda (right), presents the keys to one of the drivers of the water tankers to Mr Fanny Ramufhufhi (second from left), while Cllr Thina Mbedzi (left) and the municipal manager, Ms Sylvia Ndou (second from right) give support.

In an attempt to respond much faster to water shortages in the Vhembe area, the district municipality has bought three new water tankers.

VDM’s executive mayor, Cllr Dowelani Nenguda, said this was the right step forward as the new tankers would ease the pressure on the existing water trucks that they had in the region.

He was speaking a fortnight ago when the new tankers were handed over, “which will help in dealing with challenges of the delivery of water in communities”.

At a cost of R7,5 million, the three new water trucks are fitted with the capacity of 6 000 litres of water and a compartment for 500 litres of foam and a rear-mounted water pump.

“We had the challenge of having to stretch our existing water trucks throughout the Vhembe region and this proved strenuous in some instances. There are times when the pipes burst and communities are left without water, but the tankers will then be called for assistance," Nenguda added.

He said the three water tankers would be distributed to provide service in the Collins Chabane, Musina and Makhado municipalities.