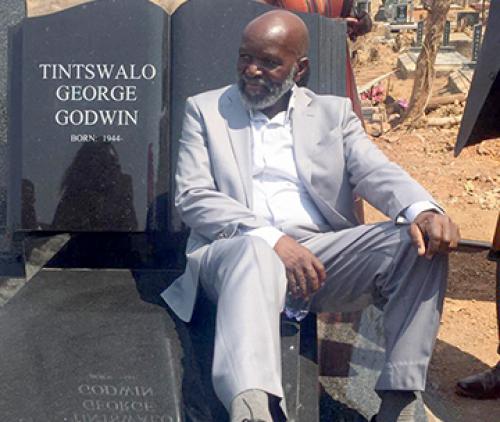 Veteran politician Mr George Mashamba sits on the tombstone he prepared as his final resting place.

ANC veteran unveils his own tombstone

Veteran ANC leader and former Robben Island prisoner Mr George Mashamba set the tongues wagging when he unveiled his own tombstone, along with that of his deceased wife, a fortnight ago.

The former MEC, Ms Happy Joyce Mashamba, died in June last year. A bit more than a year later, her husband organised a special event to unveil her tombstone. Much to the amazement of the guests who attended the ceremony, people found that next to Ms Mashamba’s tombstone was one in the name of Tintswalo George Mashamba.

“Lexi nga heriki xa hlola,” said George Mashamba, using a Xitsonga idiom that means everything comes to an end. “I bought the tombstone because I wanted to show people that everything has an end and I am not afraid to follow comrade Joyce,” he said.

“I was told in church that what happens on earth is happening in heaven and I am serving the community through the ANC and the SACP,” he said. He said when he and the late MEC were married in church they were told they would only be separated by death.

“This is not true because death never separated me from comrade Joyce. That is why I have my grave next to hers,” he said. He said many Christians believed they would go to heaven but were afraid of death. “They would not like to buy their coffins when they are alive because they fear death. I am not afraid of following comrade Joyce,” he said.

Mashamba, who is also the chairperson of the ANC’s integrity commission, later sat on his tombstone for a photoshoot. It shows when he was born, but what is missing is the date of his death.

During the function to unveil the tombstones, several family members and friends paid tribute to the late MEC. Bafana Sithole and Daphne Nkosi praised her for the role she played in the liberation struggle. Professor Muxe Gessler Nkondo said the late leader’s track record as a liberation fighter placed her on the roster of elite freedom fighters in Africa.

Deputy Speaker of Parliament Lechesa Tsenoli said that the late leader had been an international politician. He urged people to follow her role in serving the community.

Pioneer broadcaster Ben Shilubane, who is an uncle of the late Joyce Mashamba, praised her for having been close to his wife until she died.