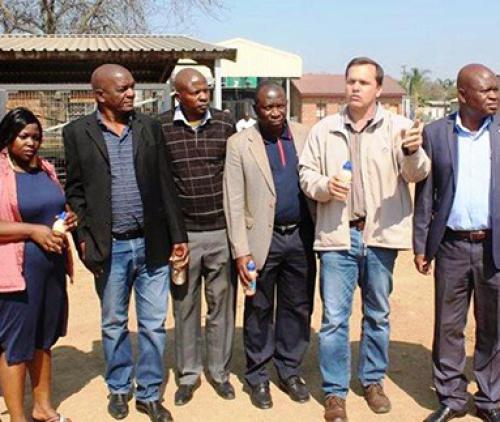 The employees of Limpopo Dairy Farm at Ha-Magau near Louis Trichardt will reap the fruits of their hard work from their 900-hectare farm purchased by Mr Tobias Fourie, who is also a director of the company.

Fourie highlighted during the visit by the executive mayor of the Vhembe District Municipality, Cllr Dowelani Nenguda, and a delegation last Thursday, that they had purchased the land in order to grow fodder that would help to feed their cattle.

“Employees are the majority shareholders, with 51% ownership of the shares in the project. The project will empower most of our employees and the majority of them come from the Sinthumule-Kutama areas in Makhado.  During the dry season, we allow cattle from Magau village to graze in our camp as a symbol of support to our community,” said Fourie.

Fourie further indicated that a water shortage was a challenge for their production and urged the district municipality to drill boreholes for them.

Nenguda said that the district municipality supported the initiative, because it benefitted and empowered the communities. “We are waiting for the Department of Agriculture to approve and provide the license to use the water, then the project will benefit. We are very grateful for Limpopo Dairy Farm to come up with this initiative as a business that always puts employees and our community forward in fighting poverty and unemployment.”