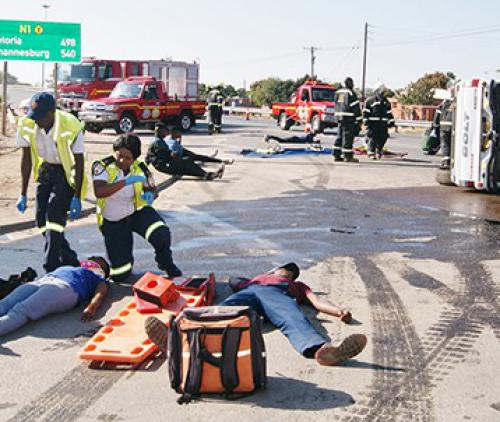 Rehearsing for the emergencies

A long-distance taxi driver, Mr Moses Mkhandawire, said he was worried that lives might have been lost during a “fatal accident” that happened on the N1, near the China Mall in Musina last Tuesday.

Little did Mkhandawire know that the incident was a staged road incident management system simulation (imitation of a situation) exercise performed in order to assess how emergency services would respond during a time of disaster and emergencies.

“With the two vehicles damaged in the middle of the road and people scattered all over the road, I was really convinced that it was an authentic accident. The whole exercise was well organized and it took me some few minutes to realize that it was not a real accident. Thumbs up to the organizers for a job well done,” said the relieved Mkhandawire, minutes after arriving at the simulation exercise scene.

The simulation exercise was organized by the Vhembe District Municipality, in partnership with Musina Local Municipality, the SANDF, SAPS, Vhembe Emergency Management Services (EMS), the Fire and Rescue Services, Provincial Traffic Services and De Beers Venetia Mine. The initiative is part of the Road Incident Management System (RIMS) to rehearse for the management of real disasters on the roads.

The Vhembe RIMS Chairperson, Ms Tshilidzi Nthambeleni, said RIMS was a process whereby a set of coordinated activities was initiated when an incident occurs on a road in order to minimize the direct and secondary effects of the incident, as well as to restore normal capacity and safety levels to all affected road facilities as quickly as possible. She said the simulation exercise was meant to assess the readiness of various emergency services during a time of disasters and to encourage teamwork - thereby making more efficient use of limited resources.

The manager responsible for traffic in Musina Municipality, Mr Daniel Hlongwane, said the exercise benefitted his team, who had the opportunity to revive their skills during the proceedings. “We were part of the team and we responded positively to the incident. We are happy that the simulation exercise has helped us to identify matters requiring improvement and intervention, thereby raising the standard of incident management on our roads. One good thing is that everyone responded to the best of their best abilities and in accordance with RIMS procedures.”