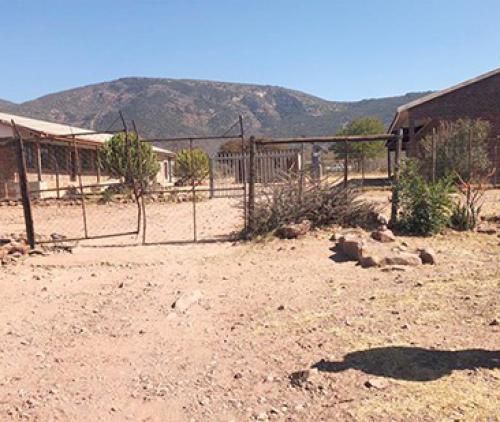 One of the parents, photographed next to the closed Hendrick Nthambeleni School.

School at Maungani closed for not having 200 learners

The two blocks containing seven classrooms at Hendrick Nthambeleni Secondary School in Maungani village in the Nzhelele area has become a white elephant, following the closure of the school.

With an enrolment of 124 learners from Grades 8-12 and five teachers, the school was closed after merging with Luatame Secondary in Tshituni village on 9 July, when the school reopened after the mid-year examination.

Some parents are not very excited about the latest developments. “All we want is for our children to be taken back to their school premises. This merger is not working. We can’t sit and watch while our children are travelling long distances to attend school every day,” said a parent, Mr Nditsheni Netshiavha. “This merger thing is causing too many problems for our kids.”

Limpopo Department of Education spokesperson Mr Sam Makondo said the closure of the school and movement of the learners would not disrupt the academic programme. He further said it was in the best interests of learners to move them to another school that had enough teachers. A minimum of 200 learners is needed for a school to operate, he said.